Psalm 145:13 KJB (NASB, NET) - "Thy kingdom is an everlasting kingdom, and thy dominion endureth throughout all generations."

ESV (RSV, NIV, Holman, all Catholic Versions) - "Your kingdom is an everlasting kingdom, and your dominion endures throughout all generations. THE LORD IS FAITHFUL IN ALL HIS WORDS AND KIND IN ALL HIS WORKS."

"Thy kingdom is an everlasting kingdom, and thy dominion endureth throughout all generations."

It should be noted that several of these Bible versions are Critical Text based, and yet the do NOT include these extra 14 words in the Psalm.

Not even Daniel Wallace's NET 2006 version includes the extra words, but reads as do the KJB, NKJV, NASB.

However in the NIV 1984 edition we read: "Your kingdom is an everlasting kingdom, and your dominion endures through all generations. THE LORD IS FAITHFUL TO ALL HIS PROMISES AND LOVING TOWARDS ALL HE HAS MADE."

But wait!  There's more.  Now the brand new 2010 NIV has come out and they changed the verse once again.  Now it reads: "The LORD is TRUSTWORTHY IN all he promises and FAITHFUL IN ALL HE DOES."

So even the NIV has now changed "faithful" to "trustworthy" and "loving to all he has made" to "faithful in all he does."  It just keeps getting better and better, huh.

Other versions that also include these extra words are the liberal RSV of 1952, followed by the NRSV 1989, ESV, (which places them in brackets, indicating uncertainty), the Message 2002, the new Common English Bible of 2011 and now the Holman Christian Standard Version of 2009.

The ESV places these extra 14 words in [brackets] indicating doubt, but notice how the ESV footnotes change and deceive.  The ESVs of 2001, 2007 and 2011 all tell us in the footnote: "These two lines are supplied by ONE Hebrew manuscript, Septuagint, Syriac (compare Dead Sea Scroll)"

BUT now the 2016 ESV edition has come out and it still includes these extra words [in brackets] but this time their footnote says: "These two lines are in brackets because THEY APPEAR IN MOST BUT NOT ALL ANCIENT MANUSCRIPTS."

How is THAT for fudging the truth, folks?

The extra words found in Psalm 145 are also found in ALL Catholic bible versions from the Latin Vulgate, the Clementine Vulgate, the Catholic Douay-Rheims of 1582, the Douay of 1950, the St. Joseph New American Bible of 1970, the New Jerusalem bible of 1985 and the 2009 Catholic Public Domain Version.

The NIV, RSV, ESV (2001, 2007, 2011 editions), Holman then have a footnote telling us that these extra 14 words come from one Hebrew manuscript, the Dead Sea Scrolls, the Greek Septuagint and the Syriac, but that most Masoretic texts do not have these last two lines.

"Most Masorertic texts"? HOW ABOUT ALL HEBREW MANUSCRIPTS DO NOT HAVE THEM EXEPT ONE, AND IT  PLACED THE EXTRA WORDS AT THE BOTTOM OF THE PAGE?!!! 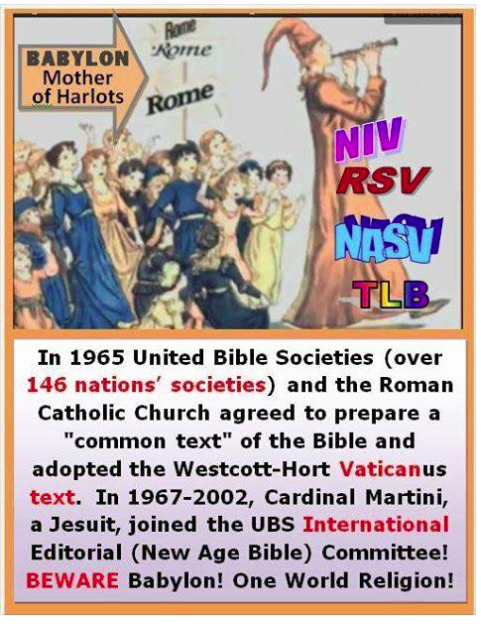 So are these extra words given by inspiration of God or not? Have they been lost from all Hebrew versions as well as the KJB, NKJV, NASB, NET or did the NIV, RSV, [ESV], Holman Standard and Catholic versions add them to God's word?

Adam Clarke says regarding the added words of Psalm 145:13, "not in the Hebrew text, that answers to the nun, which is found in no printed copy of the Hebrew Bible; yet ONE MANUSCRIPT, now in Trinity College, Dublin, has it thus, I suppose by correction, IN THE BOTTOM OF THE PAGE."

John Gill comments: "This psalm is written alphabetically, as is observed on the title of it; but the letter "nun" is here wanting. NOR IS THE ORDER ALWAYS STRICTLY OBSERVED IN ALPHABETICAL PSALMS; IN THE 37TH PSALM THE LETTER 'AIN' IS WANTING, AND 3 (letters) IN THE 25TH PSALM. (caps are mine). The Septuagint, Vulgate Latin, Syriac, Arabic, and Ethiopic versions, supply this defect here, by inserting these words, "the Lord is faithful in all his words, and holy in all his works," as if they were begun with the word Nman, but they seem to be taken from Psalm 145:17, with a little alteration."

Not even Daniel Wallace's NET version includes the extra words in verse 13. He omits them and his version reads as do the KJB, NASB, NKJV and many others.

He comments in his footnote: "Several ancient witnesses, including one medieval Hebrew manuscript, the Qumran scroll from cave 11, the LXX, and the Syriac, supply the missing nun verse, which reads as follows: “The Lord is reliable in all his words, and faithful in all his deeds.” SCHOLARS ARE DIVIDED (Caps are mine) as to the originality of this verse. L. C. Allen argues for its inclusion on the basis of structural considerations (Psalms 101-150 [WBC], 294-95), but there is no apparent explanation for why, if original, it would have been accidentally omitted. The psalm may be a partial acrostic, as in Psalms 25 and 34 (see M. Dahood, Psalms [AB], 3:335). THE GLARING OMISSION OF THE NUN LINE WOULD HAVE INVITED A LATER REDACTOR TO ADD SUCH A LINE."

Aren't scholars funny? What one firmly asserts, another denies in no uncertain terms. Every man does that which is right in his own eyes, and he becomes his own final authority.

If versions like the NIV, RSV, ESV and Holman Standard are so intent on following the very different Dead Sea Scroll manuscripts, one HUGE, GLARING DIFFERENCE is to be noted, which the NIV, RSV, ESV folks apparently don't want you to know. They never mention it in their "scholarly footnotes".

According to the recent book, The Dead Sea Scrolls Bible, by Martin Abegg Jr., Peter Flint & Eugene Ulrich, by Harper Collins Publishers 1999, not only do the Dead Sea Scrolls contain these extra 15 words in Psalm 145:13 BUT the DSS also contain the following words - "BLESSED BE THE LORD AND BLESSED BE HIS NAME FOREVER AND EVER", not just once, but 21 TIMES in this very Psalm!

The whole phrase "Blessed be the LORD and blessed be his name forever and ever" occurs AFTER EVERY SINGLE VERSE IN THE WHOLE PSALM! So why don't the NIV, RSV, ESV and Holman follow the DSS in all these verses? This would add another 252 words to the Psalm!

Why don't the NIV, RSV, ESV and Holman Standard just omit the verse too? What logical "science of textual criticism" would allow the NIV translators to ADD 15 words to verse 13 based on the DSS, and then NOT OMIT another 18 words from the previous verse based upon the same Dead Sea Scrolls, and then NOT ADD the additional 252 words found throughout the whole Psalm after every single verse saying: "Blessed be the LORD and blessed be his name forever and ever"? God only knows.

And they call this type of selective nonsense "the science" of textual criticism and "new findings of scholarship"!  I think God has a different name for it - "ye have PERVERTED the words of the living God" - Jeremiah 23:36

Finding the true words of God in the modern versions is like throwing darts at a target or consulting an Ouija board - you never know what you are going to come up with.

God says in Deuteronomy 4:2 "Ye shall not add unto the word which I command you, neither shall ye diminish ought from it" and in Proverbs 30:5-6 "Every word of God is pure...Add thou not unto his words, lest he reprove thee, and thou be found a liar."

Psalm 145:13 is just one of hundreds of examples of real differences between the texts of the Authorized King James Version and the multitude of conflicting Vatican versions. Not all bible versions are the same, nor can they all equally be the inspired, infallible, complete words of God.

I'll stick with the one God has clearly set His mark of approval on - the Authorized King James Holy Bible.