“God don’t make no robots!”  (Typical "free will" Fantasy lover's response to the truth of "the purpose of God according to election" Romans 9:11) 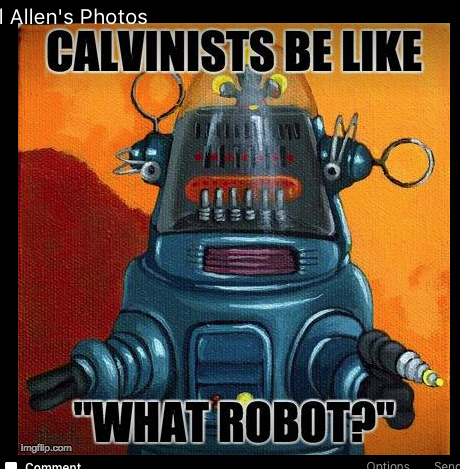 The “natural man” (1 Corinthians 2:14) absolutely hates the doctrines of God’s electing grace and most of them do not really understand what Monergism (One working) or “Calvinism” is really all about.  And they don’t know their Bibles very well, either.

Most “free willers” simply mock at the idea that God would chose to save and redeem a specific number of people He calls “His elect” and condemn the rest to be punished for their own sins in the lake of fire, who (as the free willers say) “never had a chance to accept Christ as their Saviour”.

There are two fundamental truths they are missing. The first is that man, by nature after his fall in Adam, is not some innocent creature.  He is a rebel against the God of heaven.

Fallen man “loves darkness rather than light” (John 3:19) and, if left to himself, will not believe, will not repent, resists God and will not come to him for salvation.

God would be perfectly just and righteous if he were to simply condemn us all.

The second error in their thinking is that if God chooses to redeem some and leave the others in their sins to perish, we are then “robots” or “puppets”.   They tell us that “Love is not love if it is forced.”

They have apparently forgotten the first set of truths about our “natural man” fallen and rebellious state. There ISN’T anybody who loves the true God. No such animal exists.

God needs to do a complete heart transplant and take away the stony heart and give us a heart of flesh. (Ezekiel 36:26). In fact, he needs to give an entirely new LIFE to a man who was previously DEAD in his sins and trespasses.

The "free willers" mock at the purpose of God according to election and think we are just ROBOTS or puppets.

BUT the Biblical truth of the matter is that God likens His dealings with men in even MORE EXTREME terms than that of “robots”. At least a robot or puppet has some outward form that resembles a man, even though there is no life to it.

God calls us A LUMP OF CLAY!

Several times in the Scriptures God refers to himself as the Potter and we are the clay.  And the Potter has power over the clay OF THE SAME LUMP to make one vessel unto honour, and another unto dishonor.

How much “free will” does a lump of clay have?

“Surely your turning of things upside down shall be esteemed as THE POTTER’S CLAY: for shall the work say of him that made it, He made me not? or shall THE THING FRAMED say of him that framed it, He had no understanding?”  Isaiah 29:16

“Woe unto him that striveth with his Maker! Let the POTSHERD strive with the POTSHERDS of the earth. Shall the CLAY say to him that fashioneth it, What makest thou? or thy work, He hath no hands?”  Isaiah 45:9

God refers to people, both the elect and the non-elect by many terms that are more extreme than just “robots”.

“And think not to say within yourselves, We have Abraham to our father: for I say unto you, that GOD IS ABLE OF THESE STONES TO RAISE UP CHILDREN UNTO ABRAHAM.”  Matthew 3:9

How much “free will” does a stone have?

“Ye also, as lively STONES, are built up a spiritual HOUSE, an holy priesthood, to offer up spiritual sacrifices, acceptable to God by Jesus Christ.” 1 Peter 2:5

“that they might be called TREES OF RIGHTEOUSNESS, THE PLANTING of the LORD, that he might be glorified.” Isaiah 61:3

God mocks the proud arrogance of the king of Assyria, whom He Himself had brought against the land of Israel to judge them.

After conquering several nations, the king of Assyria boasts: “By the strength of my hand I have done it, and by my wisdom; for I am prudent: and I have removed the bounds of the people, and have robbed their treasures, and I have put down the inhabitants like a valiant man.”  Isaiah 10:13

Yet God reminds him that he was but A TOOL in the hand of the LORD of hosts.

Other terms God uses to describe mere men of flesh.

“I said in mine heart concerning the estate of the sons of men, that God might manifest them, and that they might see that THEY THEMSELVES ARE BEASTS.”  Ecclesiastes 3:18

“but what they know naturally, AS BRUTE BEASTS, in those things they corrupt themselves.”  Jude 10

“His watchmen are blind: they are all ignorant, THEY ARE ALL DUMB DOGS, they cannot bark…Yea, THEY ARE GREEDY DOGS which can never have enough”  Isaiah 56:10-11

“FOR IF A MAN THINK HIMSELF TO BE SOMETHING, WHEN HE IS NOTHING, HE DECEIVETH HIMSELF.” Galatians 6:3

Modern Christianity, and especially “free will” Christians, have an exalted view of man, and a low view of the God of the Bible who is high and lifted up who "doeth according to his will in the army of heaven, and among the inhabitants of the earth: and none can stay his hand, or say unto him, What doest thou?"

Most Christians think way too much of themselves and too little of the God who made us and with whom we have to do.

King Nebuchadnezzar, who once thought much of himself, after being humbled by God, confessed:

“And ALL THE INHABITANTS OF THE EARTH ARE REPUTED AS NOTHING: AND HE DOETH ACCORDING TO HIS WILL in the army of heaven, and among the inhabitants of the earth: and NONE CAN STAY HIS HAND, OR SAY UNTO HIM, WHAT DOEST THOU?”  Daniel 4:35

"For the kingdom is the LORD'S and HE IS THE GOVERNOR AMONG THE NATIONS." Psalms 22:28

"...being predestinated according to THE PURPOSE OF HIM WHO WORKETH ALL THINGS AFTER THE COUNSEL OF HIS OWN WILL." Ephesians 1:11

“And said, O Lord God of our fathers, art not thou God in heaven? and rulest not thou over all the kingdoms of the heathen? and in thine hand is there not power and might, so that none is able to withstand thee?  2 Chronicles 20:6

“ Thine, O Lord is the greatness, and the power, and the glory, and the victory, and the majesty: for all that is in the heaven and in the earth is thine; thine is the kingdom, O Lord, and thou art exalted as head above all.

“ I know that thou canst do every thing, and that no thought can be withholden from thee.” Job 42:2

“But our God is in the heavens: he hath done whatsoever he hath pleased.”  Psalms 115:3

“Whatsoever the Lord pleased, that did he in heaven, and in earth, in the seas, and all deep places.” Psalms 135:6

“The Lord hath made all things for himself: yea, even the wicked for the day of evil.” Proverbs 16:4.

"The king's heart is in the hand of the LORD, as the rivers of water: HE TURNETH IT WHITHERSOEVER HE WILL."  Proverbs 21:1.

"For GOD HATH PUT IN THEIR HEARTS TO FULFILL HIS WILL, and to agree, and give their kingdom unto the beast, until the words of God shall be fulfilled."  Revelation 17:17

“Woe unto him that striveth with his Maker! Let the potsherd strive with the potsherds of the earth. Shall the clay say to him that fashioneth it, What makest thou? or thy work, He hath no hands?

Woe unto him that saith unto his father, What begettest thou? or to the woman, What hast thou brought forth?” Isaiah 45:9-10


“And Jesus came and spake unto them, saying, ALL POWER IS GIVEN UNTO ME in heaven and in earth.”  Matthew 28:18

Now, THAT is the God who is worthy to be worshipped, loved and feared.  Do you know him?

Did you choose God or did He choose you?

Free Will - The Cause of Sin!

The Free Willer’s god [OF THE WHITE SPACES]