Is having an Inerrant Bible "No Big Deal"?

Is having an inerrant Bible "No Big Deal"?

Adam C. posts: "There was no complete and inerrant Bible before 1611. Which makes me think it's not really such a big deal after all. Any comments on that?"


Hi Adam. Several things have changed since 1611. If a Christian only has one bible, he probably thinks it is the true and inerrant words of God. He may well be wrong in this belief, but it is what he believes. And the gospel is found in any bible in any language in all of history. That is not the point.

But when he has 2 or 5 or 10 different "bibles" with different texts and many whole verses found in some but not in others, and even the same verses have totally different meanings, then he quite naturally begins to ask the question - Which one, if any of them, is right and 100% true?

What is going on today, as the polls show and as we see on a daily basis on Facebook and all around us, is that most Christians do NOT believe that any bible in any language is now or ever was the complete and inerrant words of God.

The Bible tells us that the last days will be characterized by a falling away from the faith, a giving heed to the doctrines of devils, and apostasy.

God's own character and the truth of his promises are at stake when it comes to whether or not there exists such a thing as a 100% true Bible or not. He promised to preserve his words and that heaven and earth would pass away, but not his words.

Why did God wait till after the invention of the printing press and to give us his perfect book in the King James Bible? It was his time to do so. Why did God take 7 days to create the heavens and the earth? Why didn't he just do it all at once?

You'll have to ask him about it. He hasn't yet told us why he did it this way, but we see the evidence that this is what he did.

God sees the end from the beginning, and he knew that English would become the end times universal language and that it would be the English speaking, King James Bible carrying missionaries that would take the gospel to the far ends of the earth.

God also knows that there is only one Bible true Christians have recognized as being the complete and inerrant words of God for over 400 years now and counting.

NOBODY seriously defends or believes that any of these modern versions or even any of the older versions are the inerrant words of God.

There are no NIV only groups, or ESV only groups. You can tell people that you personally like the Message, or the Living bible, or the NASB, NKJV, Geneva bible, "the" Hebrew and "the" Greek (never identified) or the Daffy Duck Version and the bible agnostics won't bat an eyelash.

But tell people you believe the King James Bible is the only inerrant Bible and people start to go ballistic and throw things at you.

Sort of like the reaction you often get when you tell people that the Lord Jesus Christ is the ONLY way of salvation and all other religions are false.

As there is hatred in the world toward the Word of God, so too does it exist toward the true word of God.

No other book gets people's blood boiling like the King James Bible. This should tell you something. 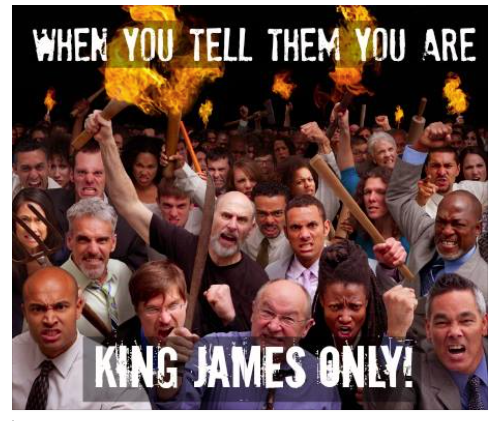