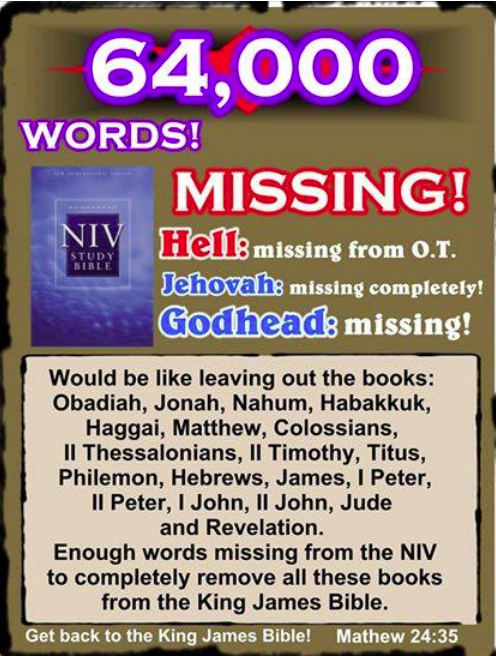 Some seminary students, who are in the process of having their minds corrupted by “the best of modern scholarship”, lightly dismiss the charge that the NIV perversion is missing some 64,000 words, saying that this figure is only a Riplingerism and not factual.

Not only does Mrs. Riplinger make this factual charge but so also does the Australian author and KJB defender Les Garrett in his book "Which Bible Can We Trust?". If one runs the KJB and the NIV through a computer, the KJB contains over 800,000 words and the NIV has a little more than 64,000 fewer words in it.

If you put them all together, that would be from about the middle of the book of Acts to the end of Revelation. Most of this is not due to the approximately 6000 words missing due to a different Greek text employed by the NIV editors. The differences in Greek texts do account for 617 words (in the red letter editions) actually spoken by our Lord Jesus Christ, literally thousands of other words penned by the apostles, and the names of "Lord" 35 times, "Jesus" 34 times and "Christ" 44 times for a total of 115.

However I am not talking about these deleted words due to a different text in the NIV, ESV and NASB versions, but rather I am going to address the words deleted and added to the NIV which are found in the underlying Greek and Hebrew texts that the NIV editors themselves use as the basis for their translation.

You can look up this information for yourself, (attention learned seminary student who tells us on the KJB side that we don't want to be confused by the facts). This information is available in "The NIV Exhaustive Concordance" by Edward W. Goodrick & John R. Kohlenberger III, Zondervan Publishing House 1990. I have a copy right here in front of me, and I am not making this stuff up out of my own imagination.

This is only a partial list of the words that the NIV concordance tells us they have "not translated" (their own words)  in any way but have deleted from the very Greek texts they use in their translation. If you go to the back of the NIV concordance, and look up the individual words, they will tell you how they translated it, how many times for each rendering, and the last figure is the number of times it is listed as "not translated".

Examples from the New Testament

This is why the KJB has long sentences, "and"...."and"... The NIV apparently felt these God inspired words were unnecessary, so they edited them out of God's book, to make it more contemporary, and to have short, choppy sentences. I'm sure God will reward them for their labors.

More Examples from the New Testament

This little word “Behold” in Greek idou, occurs 200 times in the underlying Greek text used by the NIV, yet over half of the time it is not translated. Theos (God) 3 times omitted or not translated when found in their texts.

These are just some examples and they are all documented in the NIV concordance itself, not in some pro KJB publication. These are hard facts, in black and white, in their own literature.

In addition to "not translating" literally thousands of words, the NIV also adds thousands more. I will give just a very few examples of this. In the new testament alone, the NIV adds the word "God" 151 times, when it is not found in any Greek text nor idiomatic expression. This can be seen by looking in the NIV concordance under the word God.

The case is equally as bad in the Old Testament.

I will give just a very few examples. The word # 3378 in the NIV concordance is listed on page 1467. In the KJB it is translated as JEHOVAH, GOD or LORD. The NIV, NASB, ESV and NKJV do not contain this personal name of the redeemer God, Jehovah, at all, but only translate it as either God or Lord.

However 38 times when this word occurs in the Hebrew text, the NIV has "not translated" it at all. And 52 times they have put the word GOD in the English NIV when it is not in the Hebrew text. The word Elohim (God) is not translated 13 times, and added an additional 52 times in the NIV "bible". Thus, in these two instances alone of these 2 different Hebrew words for God, the NIV omits it 51 times and adds it 104 times.

The NIV has a similar problem with the names of people. For example, the name DAVID is found 1075 times in the O.T. texts according to the NIV concordance. However the NIV has "translated" the Hebrew word DAVID (Dawid) as either  "he", "him" or "his" 69 times, and 21 times they left it "untranslated" - their own word as found in the NIV complete concordance. In addition to this, as you go through the complete list of the times the NIV does write out the name DAVID we see that 25 times they put the name in the text, when in fact it is not there. We find the letters NIH listed 25 times, meaning Not In Hebrew.

A similar thing happens with just about any name that occurs with regularity in the Old Testament. The name SAUL is listed 11 times as NIH, meaning it is not found in the Hebrew text but the NIV wrote it in anyway. But 9 times that it does occur in the Hebrew text, the NIV left it "untranslated" and 18 times they translated it as either "he" or "his".

So also with the names JACOB and ISRAEL.  The NIV complete concordance shows that they have written the name JACOB 16 times (NIH) when it is not in the text and that 14 times when it is in the Hebrew text they have translated it as "he", "him" or "his". When we come to the name ISRAEL, the NIV shows 18 times "untranslated" (meaning that it IS in the Hebrew text but they chose not to translate it at all), 5 times they put it in the text when it is not there (NIH) and 28 times they translated it as "they", "them" or "their". These are the facts that are found right there in their own NIV concordance.

Some examples from Zechariah.

In Zechariah 1:7 the NIV omits the word "saying" # 606 in NIV concordance. It is not translated 878 times. This Hebrew word  amarl, usually meaning to say, occurs 5317 times, so about one time out of every six the NIV omits this word.

These are just a few of the hundreds of examples that could be given. I am not making this stuff up. These are facts admitted to by the NIV concordance regarding their own work.  We will probably have to wait for the judgment seat of Christ to hear God's evaluation of their "labour of love".  But, please, don't go around saying that the KJB onlyists are spreading false rumors about the NIV having omitted so many of God’s inspired words.