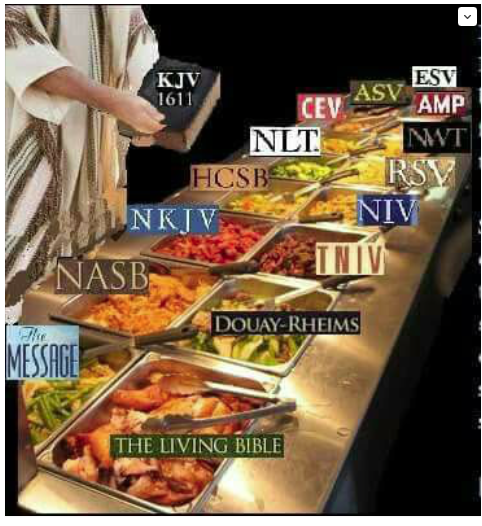 The evidence for the inspiration of this verse is simply overwhelming, yet many modern Vatican supervised versions like the ESV, NIV, [NASB], [Holman Standard], NET, Jehovah Witness New World Translation and most modern Catholic versions simply omit the verse from their text or put it in [brackets] indicating doubt.

It is also found in the Latin Vulgate, the Syriac Peshitta, Curetonian, Herclean, Coptic Boharic, Armenian, Georgian and Ethiopian ancient versions.  It was also included in the Greek Diatessaron 160-175 A.D.

It is quoted by such early church writers as Hilary, Chrysostom, Chromatius and Augustine.

Westcott and Hort completely omitted the entire verse from their critical Greek text. And this is mainly because the verse is not found in Sinaiticus, or Vaticanus, and only a handful of other manuscripts.

The earlier Catholic versions like the Douay-Rheims 1582 and the Douay Version 1950 both contained the entire verse in the text.

But once again, now the 2009 The Sacred Scriptures Catholic Public Domain Version and The Revised Douay-Rheims 2012 have put the verse back in their text.

There's nothing like the unchangeable Roman Catholic Church to give you assurance as to what the true words of God are, right?

Modern "Evangelical" versions that omit this verse from their texts are the NIV, ESV, ISV, NET, along with the Jehovah Witness NWT.

The NASB, ISV, The Voice, Living Bible and Holman Standard all [bracket] the verse, indicating doubt as to its authenticity, as they also do to other verses.

And The Modern Hebrew New Testament -

Get yourself the Bible that has ALL the verses in it and that is God's perfect and inerrant Book - the King James Bible.