More
Matthew 21:28-31 The Two Sons of the Father and the Bible Babble Buffet in Action

Matthew 21:28-31 The Two Sons of the Father and the Bible Babble Buffet in Action. 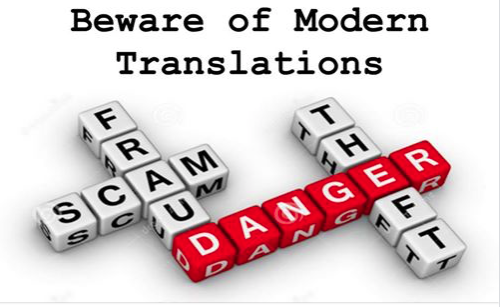 Matthew 21:28-31 KJB - “But what think ye? A certain man had two sons; and he came to the first, and said, Son, go work to day in my vineyard. He answered and said I WILL NOT; BUT AFTERWARD HE REPENTED, AND WENT. (ου θελω υστερον δε μεταμεληθεις απηλθεν)

And he came to THE SECOND (τω δευτερω), and said likewise. And he answered and said, I GO, SIR; AND WENT NOT. (ειπεν εγω κυριε και ουκ απηλθεν)

Whether of the twain did the will of his father? They say unto him, THE FIRST."  (ο πρωτος)

This is the reading found in most texts including Sinaiticus, C, E, F G, H, K, L, O, W, X, Y, the Old Latin, Syriac, Ethiopic, Slavonic, and Diatessaron ancient versions and is the reading not only of Wycliffe, Tyndale, the Geneva Bible, the KJB but also of the RV, ASV, RSV, ESV, NET, Holman, NIV and the NKJV.

The Ever Changing NASBs and The Revolving Door of the Critical Text.

However the case with the NASB is quite interesting. From 1960 through 1977, a period of 9 revisions, the NASB followed the Vaticanus manuscript which reverses these two sons and has the first son not going into the vineyard but the second one does.

BUT then in 1995 the NASB reversed themselves from the previous NASB editions and changed their readings back to match that of all the other versions. The NASB 1995 Update now reads like the KJB.

From 1960 through 1977 the NASB read: "he came to the first and said, Son go work in the vineyard. And he answered and said, I WILL SIR, AND HE DID NOT GO (εγω κυριε και ουκ απηλθεν). And he came to THE SECOND (τω δευτερω) and said the same thing. But he answered and said, I WILL NOT, YET AFTERWARD HE REGRETTED IT AND WENT (ου θελω υστερον μεταμεληθεις απηλθεν). Which of the two did the will of his father? They say, THE LATTER.”(ο υστερος)

This reading that reverses the two sons and what they say comes from the Vaticanus manuscript, which stands virtually all by itself.

Also reading this way and having the LAST son doing the will of the father instead of the FIRST are the Moffat N.T. 1913, Goodspeed 1923, Rotherham’s Emphasized bible 1902.

Westcott and Hort as well as the Nestle 4th edition 1934 and the Nestle 21st edition 1975 read this way, with the two sons reversed according to the Vaticanus manuscript.  I have hard copies of these.

Even though Westcott and Hort and at least the first 21 editions of the Nestle Critical text reversed the order of the two sons, not even the Revised Version of 1881 nor the ASV of 1901 nor even the RSV followed this erroneous reading, but stuck with the Traditional reading of the KJB.

BUT later on, the Nestle-Aland Critical text reversed themselves and now in the 28th and 29th editions it reads as it stands in the Traditional text of the KJB, with the sole exception that they have changed “the second” (τω δευτερω) which is the reading of the TR, Sinaiticus correction and Vaticanus, for “THE OTHER” (τῷ ἑτέρῳ), which  is the reading of manuscript D.


The “new” NASB follows the reading of “THE SECOND” (τω δευτερω) and so too do the RV, ASV, RSV and NRSV while the NIV, ESV, NET go with the other reading of “THE OTHER son” (τῷ ἑτέρῳ), even though “son” is not in any text.

Both the Douay-Rheims of 1582 and the Douay Version 1950 read like the KJB has it, with the first son saying he would NOT go and then changing his mind and going, and the second saying he would go but not going.

Then the St. Joseph New American bible of 1970 reversed the role of the two sons and what they said and did as the earlier NASB and Jehovah Witness versions had it for so long, with the first son saying he would go but didn't while the second son said he would not go, but then changed his mind and went.

But once again the Catholics have revised their “bible” versions and now the 1985 New Jerusalem reads like the others with the first son saying he will NOT go and then going, and the second saying he would go but he doesn’t.

Nobody seriously believes that any of these constantly changing modern versions are the inerrant words of God.

If you would like to learn the facts concerning the True Character of the so called “oldest and best manuscripts” upon which the modern Vatican supervised text versions like the ESV, NIV, NASB, NET, Holman, etc. are based, see this ongoing study here -

I along with thousands of other redeemed by the blood of the Lamb children of the living God believe that God has worked in history to give us the true, complete and inerrant words of God in a real, in print Bible we can hold in our hands and believe every word.

It is called the King James Holy Bible. Get one for yourself and believe it. You will never go wrong.