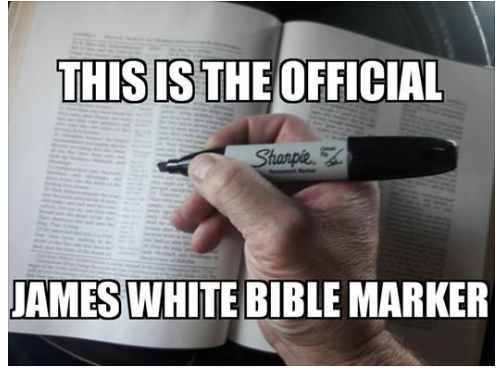 Muslims use James White’s own material to try to convince Christians that we do not have an inerrant Bible.  James White says 1 John 5:7 and Mark 16:9-20 are forgeries.  The video is only 9 minutes long. Listen to the two Muslims discussing this in the last 4 minutes.


The verses in question have been in every Bible we know about in history in every language it was ever printed in, except the liberal RSV that removed them, and then the NRSV put them back in again.

Even critical text versions like the ESV, NIV, NASB and the modern Catholic versions keep these verses in their "bible" versions, although sometimes in brackets or in smaller italicized letters. When you see the footnote the "oldest and best manuscripts omit" or the NIV footnote "The most reliable early manuscripts omit Mark 16:9-20" know that they are referring to Sinaiticus and Vaticanus.

To see what these "oldest and best manuscripts" are REALLY like, go here for many examples of their utter corruption and disagreement even between themselves.

The confusion and doubt thrown upon these inspired verses of Scripture can be seen in the modern versions themselves. The RSV of 1952 actually omits all twelve verses from their text and places them in small italicized letters at the bottom of the page. Then the NRSV, and the ESV (both revisions of the RSV) have put them back in the text in brackets and separated from the rest of the chapter and with a note: "SOME of the earliest manuscripts do not include 16:9-20."

SOME!?! I thought "some" meant several, not TWO! The NASB is interesting in that it continues to change from one edition to the next. The 1960 NASB brackets verses 9-20 and footnotes "Some of the oldest mss. omit." Then it adds another ending to Mark. Addition "And they promptly reported all these instructions to Peter and his companions. And after that, Jesus Himself sent out through them from east to west the sacred and imperishable proclamation of eternal salvation."

The NIV 1978 edition draws a line between verse 8 and 9 and then notes: "The most reliable early manuscripts and other ancient witnesses do not contain verses 9-20." But the 1984 Scofield NIV edition also draws a line and separates these 12 verses and footnotes: "Verses 9-20 are not found in the two most ancient manuscripts, the Sinaiticus and Vaticanus...but it is quoted by Irenaeus and Hippolytus in the second century." So are Sinaiticus and Vaticanus "the most reliable", or have they now been downgraded to "the most ancient"? Neither of which is true at all. They certainly are not the most reliable neither are they the earliest manuscripts.

But now the "new" NIV 2011 edition has also drawn a line between these verses and the others; tells us "The earliest manuscripts and some other ancient witnesses do not have Mark 16:9-20" and then in smaller italicized letters print the last twelve verses, thus casting serious doubt as to their validity.

Doesn't it seem just a tad unscholarly and hypocritical for the NASB, NIV, ESV to include these 12 verses in their "bibles", and yet to omit the other THOUSANDS of words from the New Testament based primarily on these same two manuscripts?

If they really believe they are NOT inspired Scripture, then let them take a solid stand on their mistaken convictions, and simply OMIT them.  But don't keep sitting on the fence and sowing doubt as to the true words of God.  Oh...wait....THAT'S what they DO anyway, isn't it!

As To MANUSCRIPTS, there are none older than the fourth century, and the oldest two uncial MSS. Vaticanus and Sinaiticus are without those twelve verses.  All the others (consisting of some eighteen uncials and some six hundred cursive MSS. which contain the Gospel of Mark) contain these twelve verses.

There are also some very curious irregularities with both Vaticanus and Sinaiticus.  As Dean Burgon testifies,  the Vatican manuscript has only one blank space in the entire manuscript and it is here at the ending of Mark 16:8. He says "it is amply sufficient to contain the verses, the column in question being the only vacant one in the whole manuscript."  The Traditional Text of the Holy Gospels, Volume 1, page 298.

As for Sinaticus, according to Dean Burgon pages 298-299, even Tischendorf (who discovered this codex) believed this whole section was originally canceled out and written over by a different scribe than the one who wrote most of the manuscript.  Suddenly the letters in the columns become much larger than at any other place in the codex, either before or after.  Dean Burgon points out that if the letters had been written in the normal size, there would be ample room for these missing 12 verses.

See - The Traditional Text of the Holy Gospels, pages 298-299 The Last Twelve Verses of Mark.

Even the UBS, Nestle-Aland critical textual apparatus show the overwhelming textual evidence that exists for the inclusion of these 12 verses.  They are contained in the Majority of all remaining Greek manuscripts, including A, C, D, K, and other uncial (capital lettered) copies. They are found in the Old Latin aur, c, d, ff2, l, n, o, q, the Vulgate, the Syriac Curetonian, Peshitta, Palestinian and Harclean ancient versions, as well as the Coptic Sahidic, Boharic, the Gothic, the Armenian, the Ethiopic and the Georgian ancient versions and the early  Greek Diatessaron.

As to the Versions:--

THE SYRIAC.  The oldest is the Syriac in its various forms :  the "Peshitto" (cent. 2), and the "Curetonian Syriac" (cent. 3).  Both are older than any Greek MS. in existence, and both contain these twelve verses.  So with the "Philoxenian" (cent. 5) and the "Jerusalem" (cent. 5).

THE LATIN VERSIONS.  JEROME (A.D. 382), who had access to Greek MSS. older than any now extant, includes these twelve verses; but this Version (known as the Vulgate) was only a revision of the VETUS ITALA, which is believed to belong to cent. 2, and contains these verses.

THE ARMENIAN (cent. 5), the ETHIOPIC (cent. 4-7), and the GEORGIAN (cent. 6) also bear witness to the genuineness of these verses.


THE FATHERS.  Whatever may be their value as to doctrine and interpretation yet, in determining actual word or their form, or sequence their evidence, even by an allusion, as to whether a verse or verses existed or not in their day, is more valuable than even manuscripts or Versions. There are nearly a hundred ecclesiastical writers older than the oldest of our Greek codices; while between A.D. 300 and A.D. 600 there are about two hundred more, and they all refer to these twelve verses.

13.    AUGUSTINE (fl. A.D. 395-430) more than quotes them.  He discusses them as being the work of the Evangelist MARK, and says that they were publicly read in the churches.

16.    VICTOR OF ANTIOCH (A.D. 425) confutes the opinion of Eusebius, by referring to very many MSS. which he had seen, and so had satisfied himself that the last twelve verses were recorded in them.

Irenaeus (130-202 A.D.) writes: "Also towards the conclusion of his Gospel, Mark says: So then, after the Lord Jesus had spoken to them., He was received up into heaven, and sitteth on the right hand of God." (Against Heresies 111:10:6)

The Blank Space in Vaticanus

John MacArthur also does not believe that 12 verses as found in Mark 16:9-20 are inspired Scripture and should be in our Bible. To see a very well done refutation of John MacArthur's arguments for their omission, see these Youtube videos done by James Snapp Jr., who is not even a King James Bible believer.  He completely demolishes MacArthur's position on these verses.

Here is Part One - about 15 minutes
http://www.youtube.com/watch?v=Bx2Q1X0_r5g&feature=relmfu

And here is Part Two - about 15 minutes
http://www.youtube.com/watch?v=0s7ZxsBjtaw&feature=relmfu

And here is Part Three, the Summary - about 15 minutes

James Snapp, who is not a King James Bible believer, has this to say about James White and his criticism of Mark 16:9-20.

James White and the Ending of Mark

Hi Bob. Yes, we take it literally. But don't read something into these verses that are not there and then mock them. Read the text, believe what it says, and don't add your own interpretation into it.

Notice what verse 17 says: "And these signs shall follow them that believe; in my name shall they cast out devils; they shall speak with new tongues; They shall take up serpents; and if they drink any deadly thing, it shall not hurt them; they shall lay hands on the sick, and they shall recover."

The apostle Paul speaks of "the signs of an apostle were wrought among you" (2 Cor. 12:12) and Hebrews 2:3-4 speak of "so great salvation; WHICH AT THE FIRST began to be spoken by the Lord, AND WAS CONFIRMED UNTO US BY THEM THAT HEARD HIM; God also bearing THEM witness with signs and wonders, and divers miracles, and gifts of the Holy Ghost, according to his own will"

Mark 16 is speaking about the signs and miracles that God first did through some of the early believers that confirmed the words of the gospel, but it is does not teach that every believer through all time will be able to do these things.

People have to read that into the text, and then they mock it. But the text itself does not teach that.