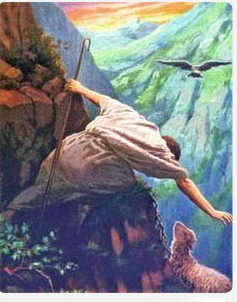 Did the Lord Jesus Christ accomplish what he said he came to do or not?

Notice that Jesus doesn't say he came to "TRY to save" or "HOPE to save" or "OFFER to save" but he came TO SAVE that which was lost.

Most Christians today, if they will reason through the logic of their theology of “It’s up to you to choose of your own free will to believe and accept Christ”, end up making Jesus Christ out to be a colossal Failure and a Liar as well.

The majority of people that are alive today or that have ever lived are not Christians. Vast multitudes of people die in their sins without Christ as their Saviour and will be lost forever.

So the question to ask ourselves is this. Is the Lord Jesus both a Liar and a Failure, or do we misunderstand this verse and many others like it?

Let’s look at the context of this verse and tie it into the rest of Scripture.

First of all, our Lord tells us in John 4:34 “My meat is to do the will of him that sent me AND TO FINISH HIS WORK.”

During his high priestly prayer as recorded in John 17 he prays “I have glorified thee on the earth: I HAVE FINISHED THE WORK WHICH THOU GAVEST ME TO DO.”

And as most of us know, his final words on the cross, where he in fact redeemed his people, were “IT IS FINISHED: and he bowed his head, and gave up the ghost.”  John 19:30

The context of Luke 19 relates the story of a man named Zacchaeus who of was of little stature, a publican who was despised by other people, and he was rich.

He wanted to see Jesus, as he passed through the town of Jericho, so he climbed up a tree so he could see him.

Jesus then looks up and sees him in the tree and calls him by name (he calleth his own sheep by name - John 10:3), and ends up saying: “This day is salvation come to this house, forasmuch as he also is a son of Abraham.” (Luke 19:9)

It is after this that Jesus says: “For the Son of man is come to seek and to save that which was lost.”

“that the purpose of God according to election might stand, not of works, but of him that calleth.” (Romans 9:11)

“So then it is NOT OF HIM THAT WILLETH, nor of him that runneth, BUT OF GOD that sheweth mercy.” (Romans 9:16)

Notice too that Luke 19:10 says “For the Son of man is come to seek and to save THAT WHICH WAS LOST.”

The verse does not say: “to save ALL THOSE WHO ARE LOST”, but “THAT WHICH WAS LOST.”  He is speaking about a particular thing, and that thing is “the remnant according to the election of grace.” (Romans 9:5) and “the election hath obtained it, and the rest were blinded.” (Romans 9:7)

It is the promised seed of Abraham. God’s elect people out of every nation, kindred, people and tongue.  This is the “that which was lost” that Jesus came to seek and to save.

“and thou shalt call his name JESUS; for he shall save HIS PEOPLE from their sins.”  (Matthew 1:21)

In Luke chapter 15 Jesus relates three parables about something that was lost and then found. He tells us of a man who lost a sheep and went looking till he found it. He relates the story of a woman who lost a coin, and she sought it out and found it. And he tells of father whose youngest son went off to the far country and wasted his substance and “was dead, and is alive again; he was lost, and is found.” (Luke 15:24)

Notice that in all three cases, what was lost actually belonged to the person who lost them, and it WAS successfully found.

Our Lord Jesus Christ is not a colossal Failure nor is he a Liar.  The words of his high priestly prayer are absolutely true. He DID finish the work the Father gave him to do, and he DID seek and save that which was lost.

“As thou hast given him power over all flesh, that he should give eternal life TO AS MANY AS THOU HAST GIVEN HIM.”  (John 17:2)

“I have manifested thy name unto the men WHICH THOU GAVEST ME out of the world: THINE THEY WERE, AND THOU GAVEST THEM ME; and they have kept thy word.” (John 17:6)

“Father, I will that THEY ALSO WHOM THOU HAST GIVEN ME, be with me where I am; that they may behold my glory” (John 17:24)

And all this was “NOT of him that willeth, nor of him that runneth, but of God that sheweth mercy.” (Romans 9:16)

The Lord Jesus DID finish the work of redeeming his people that the Father had given him, and he is no Failure at all.

“But OF HIM are ye in Christ Jesus, who OF GOD is made unto us wisdom, and righteousness, and sanctification, and redemption; That, according as it is written, He that glorieth, let him glory in the Lord.”  (1 Corinthians 1:30-31)

“So shall my word be that goeth forth out of my mouth: it shall not return unto me void, but IT SHALL ACCOMPLISH THAT WHICH I PLEASE, AND SHALL PROSPER IN THE THING WHERETO I SENT IT.”  Isaiah 55:11

“In whom also we have obtained an inheritance, being predestinated ACCORDING TO THE PURPOSE OF HIM WHO WORKETH ALL THINGS AFTER THE COUNSEL OF HIS OWN WILL.” Ephesians 1:11

“According to THE ETERNAL PURPOSE WHICH HE PURPOSED in Christ Jesus our Lord.”  Ephesians 3:11

If interested in learning more about what actually happened at the cross of Calvary in the death and resurrection of the Lord Jesus Christ, see “Did you choose God or did he choose you?” -