Who is your "scapegoat", Jesus or the devil? 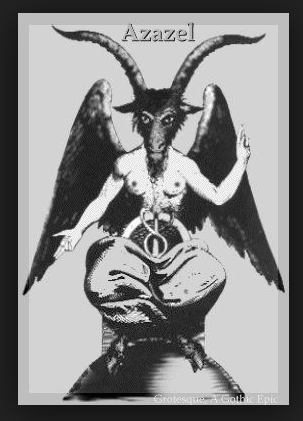 KJB (NASB, NIV, NKJV, Greek Septuagint) - "But the goat, on which the lot fell to be THE SCAPEGOAT, shall be presented alive before the Lord, to make an atonement with him, and to let him go FOR A SCAPEGOAT into the wilderness."

ESV - "but the goat on which the lot fell FOR AZAZEL  shall be presented alive before the Lord to make atonement over it, that it may be sent away into the wilderness TO AZAZEL."

"But the goat determined by lot FOR AZAZEL he shall set alive before the LORD, so that with it he may make atonement by sending it off TO AZAZEL in the desert."

Scapegoat = Jesus or Azazel = a devil?

The confusion (and the error) of some Bible translators is that they see the Hebrew word # 5799 "gazah-zehl" as being a personal name - Azazel -, whereas others (correctly) see this Hebrew word as being a compound noun made up of two words - Scapegoat. The King James Bible (and even the NASB, NIV and many others) got it right.

The ESV, Jehovah Witness NWT, NET and modern Catholic versions did not.

"Most modern scholars, after having for some time indorsed the old view, have accepted the opinion mysteriously hinted at by Ibn Ezra and expressly stated by Na?manides to Lev. xvi. 8, that AZAZEL BELONGS TO THE CLASS OF "se'irim," GOAT-LIKE DEMONS, jinn haunting the desert, to which the Israelites were wont to offer sacrifice (Lev. xvii. 7 [A. V. "devils]"

Leader of the Rebellious Angels - "This is confirmed by the Book of Enoch, which brings Azazel into connection with the Biblical story of the fall of the angels"

Azazel - In some traditions of Judaism and Christianity, it is the name for A FALLEN ANGEL.

According to the Book of Enoch, which brings Azazel into connection with the Biblical story of the fall of the angels, located on Mount Hermon,  a gathering-place of DEMONS of old  (Enoch xiii.; compare Brandt, "Die mandäische Religion," 1889, p. 38)

AZAZEL IS ONE OF THE LEADERS OF THE REBELLIOUS WATCHERS IN THE TIME PRECEDING THE FLOOD; he taught men the art of warfare, of making swords, knives, shields, and coats of mail, and women the art of deception by ornamenting the body, dyeing the hair, and painting the face and the eyebrows, and also revealed to the people the secrets of witchcraft and corrupted their manners, leading them into wickedness and impurity until at last he was, at Yahweh's command, bound hand and foot by the archangel Raphael and chained to the rough and jagged rocks of Dudael, where he is to abide in utter darkness until the great Day of Judgment, when he will be cast into the fire to be consumed forever (Enoch viii. 1, ix. 6, x. 4?6, liv. 5, lxxxviii."

The whole earth has been corrupted through the works that were taught by AZAZEL: to him ascribe all sin. - Book of Enoch 10:8

Azazel (Leviticus 16:8, 10, 26)  "Revised Version only here; rendered "scape-goat" in the Authorized Version. This word has given rise to many different views. Some Jewish interpreters regard it as the name of a place some 12 miles east of Jerusalem, in the wilderness. Others take it to be THE NAME OF AN EVIL SPIRIT, OR EVEN OF SATAN."

"But when we remember that the two goats together form a type of Christ, on whom the Lord "laid the iniquity of us all," and examine into the root meaning of this word (viz., "separation"), the interpretation of those who regard the one goat as representing the atonement made, and the other, as representing the effect of the great work of atonement (viz., THE COMPLETE REMOVAL OF SIN), IS CERTAINLY TO BE PREFERRED."

"The one goat which was "for Jehovah" was offered as a sin-offering, by which atonement was made. But the sins must also be visibly banished, and therefore they were symbolically laid by confession on the other goat, which was then "sent away into the wilderness. The form of this word indicates intensity, and therefore signifies the total separation of sin: it was wholly carried away. It was important that the result of the sacrifices offered by the high priest alone in the sanctuary should be embodied in a visible transaction, and hence the dismissal of the "scape-goat." It was of no consequence what became of it, as the whole import of the transaction lay in its being sent into the wilderness bearing away sin. As the goat "for Jehovah" was to witness to the demerit of sin and the need of the blood of atonement, SO THE GOAT WAS TO WITNESS TO THE EFFICACY OF THE SACRIFICE AND THE RESULT OF THE SHEDDING OF BLOOD IN THE TAKING AWAY OF SIN."

New English Bible 1970 - for THE PRECIPICE

The Natural Israelite Bible - the GOAT OF SIN

The fact that the sacrifice was a goat does not necessarily mean that it represented the devil in any way.  The Passover itself could be either that of a lamb or a goat.

Exodus 12:5 "Your lamb shall be without blemish, a male of the first year; ye shall take it out from the sheep OR FROM THE GOATS."

"and without the shedding of blood is no remission."  Hebrews 9:22

and "As far as the east is from the west, so far hath he removed our transgressions from us."  Psalms 103:12

THE SCAPEGOAT.to make an atonement with him and to LET HIM GO FOR A SCAPEGOAT INTO THE WILDERNESS = King James Bible

The Greek Septuagint - "and Aaron shall cast lots upon the two goats, one lot for the Lord, and the other for THE SCAPE-GOAT."

The Ancient Hebrew Bible 1907 - "But the goat on which the lot fell to be THE SCAPEGOAT shall be presented alive before the Lord, to make an atonement with him, and to let him go for a SCAPEGOAT into the wilderness."

This online Hebrew Interlinear Old Testament - "the other for THE SCAPEGOAT"

Your Scapegoat: Satan or Jesus?

Here is an article by a man who saw the truth that Jesus is his Scapegoat. He has the right conclusion, but the wrong bible (NIV)

He writes: "I believed for thirty-seven years as a member of the Seventh-day Adventist Church that Satan was my scapegoat and that Jesus would put my confessed sins on Satan"s head and he would be punished and die for them because Ellen G. White (EGW) said so. I made the mistake of trusting her as my authority. The result of using her as an authority "the lesser light" to the Bible, gave me a false understanding of the work of my Savior in saving me. I have received a great blessing in learning that Jesus is my Scapegoat and it has given me a greater love and admiration for Jesus' atonement to save me. I hope you will enjoy this research."

"Keeping in mind from Leviticus 16:10, that the scapegoat is for making atonement to God because of their sins. This atonement has to be made to God. It would be a sin to make atonement to Satan. Satan cannot remove sin nor would he want to."

you can see his whole article here -

We live in a day when it is Every Man For Himself Bible Versionism, and each guy is his own authority.

The two goats in Leviticus 16 make an atonement for God's people. They both typify the Lord Jesus Christ and what he did on the cross to redeem God's elect.

The one bears the sins and dies, and the other is released and typifies that our sins have been removed as far as the east is from the west.

I believe it is quite clear from Leviticus 16:21-22 that the second goat - the scapegoat - could NOT have been some devil named Azazel (as the fake bibles like the ESV have it) because this goat bears our sins, and Satan certainly does not do that.  Just look at what the high priest did with this second goat -

22 And the goat shall bear upon him all their iniquities unto a land not inhabited: and he shall let go the goat in the wilderness.

I am sure you can find some Bible commentators who agree with the modern Bible versions while others do not.

Matthew Henry on Leviticus 16:10 - He must then cast lots upon the two goats, which were to make (both together) one sin-offering for the congregation. One of these goats must be slain, in token of a satisfaction to be made to God's justice for sin, the other must be sent away, in token of the remission or dismission of sin by the mercy of God.

Matthew Poole - One lot for the Lord; for the Lord's use and service by way of sacrifice. Both this and the other goat typified Christ; this in his death and passion for us; that in his resurrection for our deliverance.

John Wesley - For the Lord  "For the Lord's use by way of sacrifice. Both this and the other goat typified Christ; this in his death and passion for us; that in his resurrection for our deliverance."

Geneva Bible study notes - And Aaron shall cast lots upon the two goats; one lot for the LORD, and the other lot for the b scapegoat.

(b) In Hebrew it is called Azazel, which some say is a mountain near Sinai, where this goat was sent. RATHER IT IS CALLED THE SCAPEGOAT because it was not offered but sent into the desert"

John Trapp (English Puritan) Commentary - Leviticus 16:8 And Aaron shall cast lots upon the two goats; one lot for the LORD, and the other lot for the scapegoat.

For the scape-goat. Which being a piacular or purging oblation, carried the people?s curse with it"

Since I am convinced that the King James Bible is the pure, preserved, complete and inerrant Bible I will stick to it as my final authority.

ALL of grace, believing the Book - the King James Holy Bible.