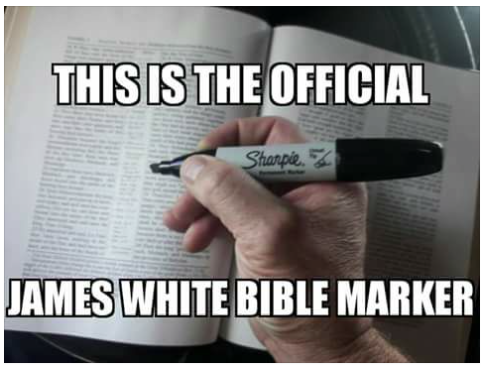 James White says Luke 23:34 - “Then said Jesus, Father, forgive them; for they know not what they do.” - is NOT inspired Scripture and does not belong in the Bible and he would not preach on it, even though it is found in virtually every Bible in every language all over the world. I wonder how many James White fans would agree with him on this.

There is a short 6 minute video posted in July of 2013, ironically titled "Was the Bible Corrupted as Muslims Claim?"  I say "ironically" because if you look carefully, you will see that a guy who calls himself "Muslim by choice" is the one who posted it. Thus we see the irony of James Wite Out thinking he is combating the Muslims, when in fact he is giving them the ammunition to throw in the face of Christians that they have NO inerrant Bible. But this irony is probably lost on James White.

Luke 23:34 - "THEN SAID JESUS, FATHER, FORGIVE THEM; FOR THEY KNOW NOT WHAT THEY DO.  And they parted his raiment, and cast lots."

This is the reading found in the Majority of all Greek manuscripts as well as Sinaiticus original and Sinaiticus 2nd correction, A, C, D correction, E, F, G, H, K, L, M, Q, S, U, V, X, Gamma, Delta, Lambda, Pi, Psi, the Old Latin copies aur, b, c, e, f, ff2, l, r1, the Latin Vulgate, the Syriac Peshitta, Curetonian, Harclean, Palestinian, some Coptic Boharic, Slavonic, Georgian, Armenian, Ethiopic and Diatessaron 160-175 A.D. ancient versions.  The whole sentence was originally in the Sinaitic mss.  Then some scribe removed it, and then another scribe put the words back in the text.

However Vaticanus omits all the capital lettered words "Then said Jesus, Father, forgive them; for they know not what they do." But it has the rest of the verse - "And they parted his raiment, and cast lots."

Almost every Bible version I am aware of includes these words in Luke 23:44 but the NRSV 1989 puts them in [[double brackets]] and the Holman Standard [brackets the words] to indicate doubt as to their authenticity.

The latest Nestle-Aland 28th edition and the UBS 4th edition critical texts both [[put the words in double brackets]] indicating serious doubt as to their authenticity.  So they may very well disappear from the up and coming "late$t in $cholar$hip Advance$" in the future.

Meanwhile the RSV, ESV and NIV all cast doubt as to whether or not they are God's inspired words by footnoting: "Some early manuscripts do not have this sentence."

We see the same pattern among the Catholic versions. The earlier Douay-Rheims 1582 and the 1950 Douay and even the 1968 Jerusalem bible all include the words with NO footnotes. But then the 1970 St. Joseph NAB and the New Jerusalem bible 1985 [bracket] the words and footnote: "This verse is retained despite its omission by some good and diverse ancient authorities."

Dan Wallace's NET version also includes the words but he [brackets] them, indicating strong doubt, and then has these mind numbing footnotes that cast doubt on whether these words are inspired Scripture or not.

He says: "Many important mss. (1א B D* W Θ 070 579 1241 pc sys sa) lack v. 34a. It is included in א*,2(A) C D2 L Ψ 0250 Ë1,(13) 33 Ï lat syc, p, h. It also fits a major Lukan theme of forgiving the enemies (6:27-36), and it has a parallel in Stephen’s response in Acts 7:60. The lack of parallels in the other Gospels argues also for inclusion here. On the other hand, the fact of the parallel in Acts 7:60 may well have prompted early scribes to insert the saying in Luke’s Gospel alone. Further, there is the great difficulty of explaining why early and diverse witnesses lack the saying. A decision is difficult, but even those who regard the verse as inauthentic literarily often consider it to be authentic historically. For this reason it has been placed in single brackets in the translation."

In other words, maybe it is, maybe it isn't; "a decision is difficult", it might be "literally inauthentic" but it is "historically authentic" - Say what?  As long as they can cast doubt with their "Yea, hath God said...?" footnotes, the Jesuits have accomplished their goal of overthrowing the final authority of God's words.

Numerous early church writers made allusion to this verse -

Archelaus Acts of the Disputation with the Heresiarch Manes (262 A.D) and here, our Lord Jesus prayed that the Pharisees might be pardoned, when He said, "Father, forgive them, for they know not what they do.”[531]

Clementine Homily XI:(died in 99 A.D. disciple of St. Peter)  prayed to the Father that the sin of those who slew Him might be forgiven, saying, `Father, forgive them their sins, for they know not what they do.’[8]

Constitutions of the Holy Apostles Book II (375-380 A.D.): For our Saviour Himself entreated His Father for those who had sinned, as it is written in the Gospel: "Father, forgive them; for they know not what they do.”[88]

Gospel of Nicodemus I The Acts of Pilate: Then Jesus cried out with a loud voice, saying: Father, let not this sin stand against them; for they know not what they do.[106]

Irenaeus Against Heresies Book II1 (180 A.D.) : And from this fact, that He exclaimed upon the cross, "Father, forgive them, for they know not what they do,”[348]

Of the Journeyings of Philip the Apostle (1st Century A.D.): was made to drink gall and vinegar, and said, Father, forgive them, for they know not what they do.[14]

Recognitions of Clement VI: Wherefore, in short, the Master Himself, when He was being led to the cross by those who knew Him not, prayed the Father for His murderers, and said, `Father, forgive their sin, for they know not what they do!'[7]

We even see that the Savior loved this city so much that the misfortunes which threatened it elicited tears from His eyes; when He was crucified, He said to His Father, “Forgive them, Father, because they do know what they do.”

"Indeed, had they known it, they would never have crucified the Lord of majesty and would never still be pursuing their Jewish follies. They, then, are the ones who know not. For this reason also the Lord Jesus says in the Gospel, "Father, forgive them, for they do not know what they are doing."

"Let them be turned backward and put to shame that wish me evil." "Turned backwards." Let us not take this in a bad sense. He wishes them well; and it is His voice, who said from the Cross, "Father, forgive them; for they know not what they do." Wherefore then doth he, say to them, that they should return "backwards"? . (Exposition of Ps. 40, in Nicene and Post-Nicene Fathers, Series 1, Vol. 8.)

"For indeed . . . great miracles did He show forth, when lifted up, turning aside the sunbeams, bursting the rocks, raising the dead, frightening by dreams the wife of him that was judging Him, at the very judgment showing forth all meekness (which was of power not less than miracles to gain them over), forewarning them of countless things in the judgment hall; on the very cross crying aloud, "Father, forgive them their sin." (Homily LXXIX on Matthew, Nicene and Post-Nicene, series 1, Vol. 10.)

"Wherefore "they that sit in the gate spoke against me," for they crucified me without the gate. "And they that drink sang against me," that is, (they who drink wine) at the feast of the passover. "But as for me, in my prayer unto Thee, O Lord, I said, Father, forgive them," namely the Gentiles, because it is the time for favor with Gentiles." ("Expository Treatise against the Jews," Ante-Nicene, Vol. 5.)

"I can return bite for bite, if I like; when hurt myself, I can fix my teeth in my opponent. I too have had a liberal education. . . . But I prefer to be a disciple of Him who says, "I gave my back to the smiters... I hid not my face from shame and spitting." When He was reviled He reviled not again. After the buffeting, the cross, the scourge, the blasphemies, at the very last He prayed for His crucifiers, saying, "Father, forgive them, for they know not what they do." I, too, pardon the error of a brother." ("Letter 50: To Domnio," Nicene and Post-Nicene, series 2, Vol. 6.)

"For the Teacher Himself, being nailed to the cross, prayed to the Father that the sin of those who slew Him might be forgiven, saying, "Father, forgive them their sins, for they know not what they do." They also therefore, being imitators of the Teacher in their sufferings, pray for those who contrive them, as they have been taught." (Clementine Homilies," Homily XI, Ch. 20, Ante-Nicene Fathers, Vol. 8).

A few modern versions have actually completely removed the words "Then said Jesus, Father, forgive them, for they know not what they do." from their text.  Among these are what is ironically called Faithful New Testament 2009, the Conservative Bible 2011 and the Holy Scriptures VW Edition 2010.

James White is getting loopier and loopier.  He SAYS he believes “The Bible IS the infallible words of God”, but ask him where to get a copy of this infallible Bible he PROFESSES to believe in and he will NEVER tell you.

Now he is "correcting" even the versions like the NASB, NIV, ESV, NET, Holman, NKJV; in fact, almost EVERY BIBLE out there that has ever been printed.  All of these bible versions contain Mark 16:9-20 and John 7:53-8:11 in them, yet James White doesn’t believe they are true Scripture and he would just “skip over them”.

James White labors under the delusion that he is somehow "standing up to" the likes of Bart Ehrman and the Muslims in his "faith based defense of the Scriptures."  And yet many Muslim sites are now using James White's own material to attack the inerrancy of the Christian's Bible, and this very site is one of them.  It was posted by a Muslim!

James White has clearly made HIMSELF his own final authority, and in his mind, you have to go to HIM to find out what God REALLY said, or didn’t say. Want a Second Opinion?  Ask him again ;-)

May God deliver us from Bible critics like James White.

One reason James White may think that Luke 23:34 does not belong in the Bible is because Jesus prays: "Father, forgive them: for they know not what they do.", and he may wonder whether this prayer was answered since so many never did repent and believe that Jesus is the Christ.  To answer this possible objection he may have to this verse, I would respond in this way.

God has forgiven or will forgive all that were given to Christ....No doubt, some involved with His crucifixion were part of His Elect.

Matthew 27:34- "Now when the centurion, and they that were with him, watching Jesus, saw the earthquake, and those things that were done, they feared greatly, saying, Truly this was the Son of God."


Jesus is our high priest as well as our Lord and Saviour. I am speaking about the elect of God only. He is not the Saviour of the non-elect nor is he their high priest.

Read through John chapter 17 and notice whom he prays for, to whom he was made manifest, and who they were that were given to him by the Father.

In verse 9 he says: "I pray for them: I pray not for the world, but for them which thou hast given me; for they are thine."