Ye believe not, because ye are not of my sheep

"But the Lord said unto him, Go thy way: FOR HE IS A CHOSEN VESSEL UNTO ME, to bear my name before the Gentiles, and kings and the children of Israel:  For I will shew him how great things he must suffer for my name's sake."  Acts 9:15-16 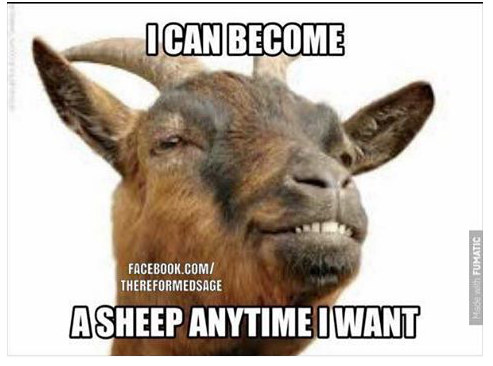 At one of our Face book forums we were discussing God’s sovereign electing grace versus “free will” theology. I posted this verse and one of the believers in “I chose of my own free will to believe the gospel” fantasy wrote:

John H. posts: “To put it mildly your interpretation of John 10:26 is an absurd perversion of Scripture.”

To whom I responded:

Well, John, why then don't YOU simply explain what it means? Here is the verse, and I will tell you what a simple and obvious meaning of the text is. Then you can explain to us all how I supposedly am wrong, OK? Thanks. Here is the verse. Let's put in it's context so we can see it better.

24 Then came the Jews round about him, and said unto him, How long dost thou make us to doubt? If thou be the Christ, tell us plainly.

25 Jesus answered them, I told you, and ye believed not: the works that I do in my Father's name, they bear witness of me.

26 BUT YE BELIEVE ME NOT, BECAUSE YE ARE NOT OF MY SHEEP, as I said unto you.

27 MY SHEEP HEAR MY VOICE, and I know them, and they follow me:

28 And I GIVE UNTO THEM eternal life; and they shall never perish, neither shall any man pluck them out of my hand.

29 My Father, WHICH GAVE THEM ME, is greater than all; and no man is able to pluck them out of my Father's hand.

Notice that the verse does NOT say "You are not my sheep BECAUSE YOU DON'T BELIEVE." But rather, the reason they do not believe is BECAUSE they are not His sheep.

Those that ARE His sheep hear His voice, and it was the Father who GAVE them to Jesus.

This ties in perfectly with John 17:2 "As thou hast given him power over all flesh, that he should give eternal life TO AS MANY AS THOU HAST GIVEN HIM."

So IF I am in error on the meaning of what clearly seems to be a plain reading of the Book, then please explain what these verses mean. Thanks

John has had a hard time with this passage and has not yet explained it for us, but another member there did and this is what she said.

The incredible blindness of free will theology -

(Don't take offense. This is to illustrate an amazing phenomenon)

22. And it was at Jerusalem the feast of the dedication, and it was winter. 23. And Jesus walked in the temple in Solomon's porch. 24. Then came the Jews round about him, and said unto him, How long dost thou make us to doubt? If thou be the Christ, tell us plainly. 25. Jesus answered them, I told you, and ye believed not: the works that I do in my Father's name, they bear witness of me. 26. But ye believe not, because ye are not of my sheep, as I said unto you."

“Will, these Jews were not Jesus's sheep because they did not believe He was the Son of God. They are not His sheep because of unbelief." (end of free willers response)

To whom I then respond:

Hi B. This is a classic case of the blinders all those who insist on holding to the false doctrine called "free will" have on. You seem incapable of SEEING what is right there in front of you, even when it is pointed out to you.

You, like several others here, turn the clear meaning of the TEXT upside down and inside out, all in a vain effort to promote your false free will fantasy.

LOOK at what the text SAYS. You completely reversed the meaning. The TEXT says "But ye believe not BECAUSE ye are not of my sheep." It does NOT say "you are not my sheep BECAUSE you don't believe.", as though they could become His sheep if only they "exercised their free will to choose to believe".

You just twisted and perverted the words of God and you aren't even aware of it. May God have mercy and open more eyes and the understanding of His people to these precious truths of His electing grace to undeserving sinners.

Dealing with "free will" Arminians -

Tom G. says; "Calvanism teaches that you do not have a choice. God makes the choice for you, whether you go to heaven, or hell. He had previously determined it before you were born."

No, Tom. It is the Bible itself that teaches this. You just don't believe what it says.

4 According as HE HATH CHOSEN US IN HIM BEFORE THE FOUNDATION OF THE WORLD, that we should be holy and without blame before him in love:

5 HAVING PREDESTINATED US UNTO THE ADOPTION OF CHILDREN BY JESUS CHRIST, ACCORDING TO THE GOOD PLEASURE OF HIS WILL,

6 To the praise of the glory of his grace, wherein he hath made us accepted in the beloved.

16 So then IT IS NOT OF HIM THAT WILLETH, nor of him that runneth, BUT OF GOD THAT SHEWETH MERCY.

17 For the scripture saith unto Pharaoh, Even for this same purpose have I raised thee up, that I might shew my power in thee, and that my name might be declared throughout all the earth.

19 Thou wilt say then unto me, Why doth he yet find fault? For who hath resisted his will?

20 Nay but, O man, who art thou that repliest against God? Shall the thing formed say to him that formed it, Why hast thou made me thus?

21 Hath not the potter power over the clay, of the same lump to make one vessel unto honour, and another unto dishonour?

22 What if God, willing to shew his wrath, and to make his power known, endured with much longsuffering the vessels of wrath fitted to destruction:

23 And that he might make known the riches of his glory on the vessels of mercy, WHICH HE AFORE PREPARED UNTO GLORY,

24 Even us, whom he hath called, not of the Jews only, but also of the Gentiles?

" The beast that thou sawest was, and is not; and shall ascend out of the bottomless pit, and go into perdition: and they that dwell on the earth shall wonder, WHOSE NAMES WERE NOT WRITTEN IN THE BOOK OF LIFE FROM THE FOUNDATION OF THE WORLD , when they behold the beast that was, and is not, and yet is."

And when the Gentiles heard this, they were glad, and glorified the word of the Lord: AND AS MANY AS WERE ORDAINED TO ETERNAL LIFE BELIEVED."

You just don't believe what the Book says. Many do not.

Notes From The Internet -

Brother Kinney, Can you please explain this verse?

Revelation 3:20 Behold, I stand at the door, and knock: if any man hear my voice, and open the door, I will come in to him, and will sup with him, and he with me.

I see those two issues as contradictory to Calvinism."

Typical "free willers" will latch on to the smallest straw in an effort to try to overthrow the numerous and clear verses that teach that God does the choosing of the elect, and that the new birth is NOT of the will of man but of God, and that some do not believe because they are not His sheep and those that do believe were given the faith and the will to believe.

In Rev. 3:20 Christ is addressing a Christian church that is lukewarm. He is not addressing unbelievers. He is talking about fellowship and communion.

But even IF he were talking about salvation, notice the words "IF ANY MAN HEAR MY VOICE".

"Faith cometh by hearing, and hearing by the word of God." Romans 10:17

The Bible tells us that God closes the ears of some, and he opens the ears of others.  If God does not open your ears and cause you to hear his voice, you will never come to him for either salvation or for fellowship.

Just believe the Book and quit trying to "explain it away" and contradict so many other clear texts.

"Yet the Lord hath not given you an heart to perceive, and eyes to see, and ears to hear, unto this day."  Deuteronomy 29:4

In Matthew 13 and in Mark chapter 4 the Lord Jesus preaches the parable about the Sower and the seed and tells us of four different results. He closes his discourse by saying: "Who hath ears to hear, let him hear." (Matthew 13:9; Mark 4:9)

The verses that immediately follow are of great interest.  In Matthew 13:10 "the disciples came, and said unto him, Why speaketh thou unto them in parables?  He answered  and said unto them, Because it is given unto you to know the mysteries of the kingdom of heaven, BUT TO THEM IT IS NOT GIVEN....Therefore speak I to them in parables: because they seeing see not; and hearing they hear not, neither do they understand."

It is even stronger in Mark 4:10-12.  There we read: "And when he was alone, they that were about him with the twelve asked him of the parable.

And he said unto them, Unto you IT IS GIVEN TO KNOW the mystery of the kingdom of God, BUT UNTO THEM THAT ARE WITHOUT, all these things are done in parables:

That seeing they may see, and not perceive; and hearing they may hear, and not understand; LEST THEY BE CONVERTED, AND THEIR SINS SHOULD BE FORGIVEN THEM."

Many people think that Jesus spoke in parables in order to make something easier to understand. But the reality is the exact opposite.

7 What then? Israel hath not obtained that which he seeketh for; but the election hath obtained it, and the rest were blinded.

8 (According as it is written, GOD HATH GIVEN THEM the spirit of slumber, eyes that they should not see, and EARS THAT THEY SHOULD NOT HEAR;) unto this day.

GOD has to open our ears to hear

Psalms 40:6 - "Sacrifice and offering thou didst not desire; MINE EARS HAST THOU OPENED: burnt offering and sin offering hast thou not required."

37 But though he had done so many miracles before them, yet they believed not on him:

38 That the saying of Esaias the prophet might be fulfilled, which he spake, Lord, who hath believed our report? and to whom hath the arm of the Lord been revealed?

39 THEREFORE THEY COULD NOT BELIEVE, because that Esaias said again,

43 Why do ye not understand my speech? even BECAUSE YE CANNOT HEAR MY WORD.

44 YE ARE OF YOUR FATHER THE DEVIL, and the lusts of your father ye will do. He was a murderer from the beginning, and abode not in the truth, because there is no truth in him. When he speaketh a lie, he speaketh of his own: for he is a liar, and the father of it.

45 And because I tell you the truth, ye believe me not.

HE THAT IS OF GOD HEARETH GOD'S WORDS: YE THEREFORE HEAR THEM NOT, BECAUSE YE ARE NOT OF GOD."

Once again, please notice that Jesus is NOT saying "If you hear, then you will also be of God", but rather, the very reason they do NOT hear is because they are NOT of God.

For more on Revelation 3:20 "Behold, I stand at the door and knock"  See the whole article here -