Humpty Dumpty Christians and their “bibles”

When a Seminarian’s Mind Cracks Open Like Humpty Dumpty - “All Bible Versions Are Inspired.” 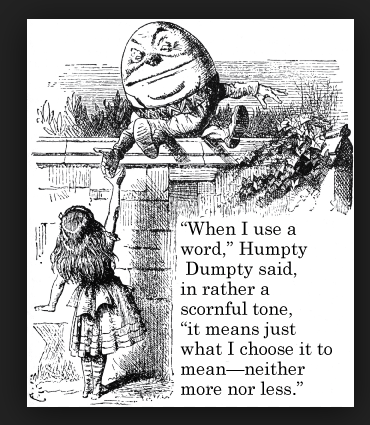 There is a certain up and coming Christian author, teacher and Seminary graduate named Jeremy Myers who has written an article titled “Why the KJV is an Inspired Translation”  -  you can see it here -

In his article  he tells us that he believes “KJV Only’s are lunatics”, and that HE believes the NKJV, NASB, ESV, NRSV, NET and the New Living Translation as well as all others he has found are also “inspired.”

Yep, he really believes this and that is what he wants you to believe as well.

He is like the Humpty Dumpty character in Lewis Carroll’s “Through the Looking-Glass” who is famous for his saying: “When I use a word it means just what I choose it to mean - neither more nor less.”

In other words, he gets to make up his own definition of what words mean.  Nice, huh?

Mr. Myers goes on to tell us: “In fact, I believe that these translations are more inspired than are the original manuscripts penned by Moses, Matthew, John, Paul, and any other Biblical author.”

He further tells us that: “the traditional doctrine of inspiration, that God superintended human authors to compose Scripture without error in the words of the original manuscripts,  is not taught in Scripture.”

Mr. Myers thinks that as long as “Scripture is profitable, meaningful and inspiring in our lives” then it is inspired.

Which translations? ALL of them. Each one is helpful in its own way for helping us understand what was originally written in Scripture.”

Looking back on our Seminarian’s thoughts I have to wonder how “Scripture inspires us to believe differently”.

Oh wait….  Maybe this is due in part because all his Bible Babble Buffet “inspired translations” DO in fact teach different things in the same passages.

And how can ALL of these “inspired” translations that differ so much from each other in both texts and meanings "help us to understand what was originally written in the Hebrew and Greek" he mentions, but never identifies?

Is Mr. Myers aware of the fact that these “inspired translations” he recommends differ among themselves by literally THOUSANDS of words including anywhere from 17 to 45 entire verses just in the New Testament?

Did God “inspire” thousands of words in one bible that He deemed not to be inspired in another?  Is that how it works in the mind of someone like Jeremy Myers?

Take a look at this study to see what some of these thousands of words are that are “inspired” is some, but apparently not in the others.

The simple FACT is, fewer and fewer Christians really believe that ANY Bible in ANY language is the complete and inerrant words of God, and most Christians today don’t even read their bibles, much less study them.

The polls all show this to be true and that Biblical knowledge today has reached what even the modern version users are calling “scandalous proportions.”

The polls also show that many young people are leaving the church, and the Number One reason they give is that they no longer believe the Bible is the inerrant words of God and completely true.

Mr. Myers, like so many others today, does not REALLY believe that any Bible in any language IS now or ever was the complete, inspired of God, inerrant and 100% true words of God that he can actually show you.

And so  he is finding novel and innovative ways to piously justify this fact and make it sound as though he is on the path to some sort of spiritual advancement and maturity with his inane statement that “All Bible translations are “inspired” or “God-whispered” or “inspiring.”

I think God may have a different way of looking at what Mr. Myers is doing.

“Professing themselves to be wise, they became fools”  Romans 1:22

If you are interested in learning more about the Bible version issue, you might like to check out the documented facts of several things I have alluded to.  You can find this information in the following article.

Lie Number One - We now have older and better manuscripts.

Lie Number Two - Vaticanus and Sinaiticus Are The Best Manuscripts

Lie Number Three - We Are Getting Closer To The Original Autographs

Lie Number Four - Erasmus Was A Catholic, so the King James Bible is also a Catholic Bible.

Lie Number Five - We Now Have More Knowledge About The Bible

Lie Number Six - Professional Liars Who SAY "I believe the Bible IS the infallible words of God."

ALL of grace, believing the Book, the King James Holy Bible.