You bet he does. 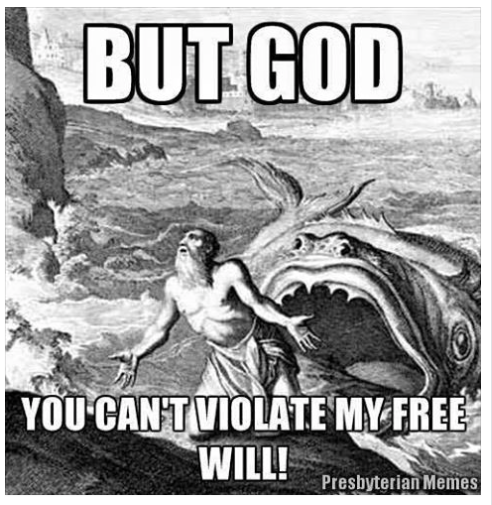 Several times now I have heard from Christians who are deeply offended by the doctrines of God’s sovereign, electing grace and who naively believe that “by their own free will they chose to believe the gospel” and that is how they got saved.

They then ask: “Well, God would never violate man’s free will, would he?”

And where might these Christians have picked up such an idea?  It is the natural man’s "will of the flesh" theology who thinks God is such an one as we are, and they no doubt heard it as "gospel truth, from God’s mouth to his ear” from some pastor they respect, and who would surely never lead us astray or teach false doctrine, right?

But what does God’s Book say about this matter?

The Bible does not paint a very flattering picture of fallen mankind.

God’s Book describes us all as being “without strength”. Not just weak, but WITHOUT strength.

We are not just “sick” but are DEAD in trespasses and sins.

We are UNGODLY, SINNERS and even ENEMIES of God. Romans 5; Ephesians 2.

The natural man “loves darkness rather than light” - John 3:19

Man is not some innocent babe in the woods who does not know the difference between right and wrong. He is a rebel who is at enmity with God and hates the light.  And if we all got what we deserve at this moment, we would instantly be tossed into the torments and fires of hell.

It doesn’t really matter whether we agree or not with God’s assessment of what fallen mankind is like or what we deserve.

WE are not the Judge and when we finally appear before the thrice Holy Creator who hates sin, all mouths will be stopped in recognition of the truth and “all the world will become guilty before God” - Romans 3:19

Does God sometimes overrule the vaunted and imaginary “free will” of man, who is in fact spiritually dead and in bondage to sin?  Yes, He most certainly does.

In Genesis 20 king Abimelech liked what he saw in Sarah, the wife of Abraham, and took her for himself. Then God comes to him in a dream by night, and tells him “Behold, thou art but a dead man, for the woman which thou hast taken; for she is a man’s wife.”

Abimelech then pleads that Abraham had told him that Sarah was his sister and that in “the integrity of my heart and innocency of my hands have I done this.” (Genesis 20:5)

Then God tells him: “Yea, I know that thou didst this in the integrity of thy heart: FOR I ALSO WITHHELD THEE FROM SINNING AGAINST ME; therefore suffered I thee not to touch her.”

God withheld this man from fulfilling his own carnal desires, in order to protect his chosen servant Abraham and his wife Sarah, through whom he would eventually bring forth the promised Seed, our Saviour Jesus Christ.

Let’s look at some more instances of where God overrules the “free will” of man.

Speaking of the Egyptians and their relationship with the children of Israel, we read in Psalms 105:25 “HE TURNED THEIR HEART TO HATE HIS PEOPLE, to deal subtly with his servants.”

“THE KING’S HEART IS IN THE HAND OF THE LORD, as the rivers of water: HE TURNETH IT WHITHERSOEVER HE WILL.”  Proverbs 21:1

“O LORD, I know that the way of man is not in himself; it is not in man that walketh to direct his steps.”  Jeremiah 10:23

“And the ten horns which thou sawest upon the beast, these shall hate the whore, and shall make her desolate and naked, and shall eat her flesh, and burn her with fire.

FOR GOD HATH PUT IN THEIR HEARTS TO FULFILL HIS WILL, AND TO AGREE, and give their kingdom unto the beast, until the words of God shall be fulfilled.” Revelation 17:16-17

One section of God’s Book that clearly shows him ruling over the natural desires of his people is Ezekiel 20:32-37.  Here we read:

32 “And THAT WHICH COMETH INTO YOUR MIND SHALL NOT BE AT ALL, that ye say, We will be as the heathen, as the families of the countries, to serve wood and stone.

33 As I live, saith the Lord God, surely with a mighty hand, and with a stretched out arm, and with fury poured out, WILL I RULE OVER YOU:

34 And I will bring you out from the people, and will gather you out of the countries wherein ye are scattered, with a mighty hand, and with a stretched out arm, and with fury poured out.

35 And I will bring you into the wilderness of the people, and there will I plead with you face to face.

36 Like as I pleaded with your fathers in the wilderness of the land of Egypt, so will I plead with you, saith the Lord God.

37 And I WILL CAUSE YOU TO PASS UNDER THE ROD, AND I WILL BRING YOU INTO THE BOND OF THE COVENANT.”

The prophet Jeremiah didn't want to speak any more in the name of the Lord, but God overruled his will, and forced him to continue preaching.

"O LORD, thou hast deceived me, and I was deceived; THOU ART STRONGER THAN I, AND HAST PREVAILED: I am a derision daily, every one mocketh me. For since I spake, I cried out, I cried violence and spoil; because the word of the LORD was made a reproach unto me, and a derision daily. Then I said, I WILL NOT MAKE MENTION OF HIM, NOR SPEAK ANY MORE IN HIS NAME. BUT HIS WORD WAS IN MINE HEART AS A BURNING FIRE SHUT UP IN MY BONES, AND I WAS WEARY WITH FORBEARING, AND I COULD NOT STAY."  Jeremiah 20:7-9

We see a very similar thing about the sovereignty of God’s will over man’s in the opening chapter of Jeremiah itself. In Jeremiah 1:5-7 we read:

The word of the LORD came unto me, saying, Before I formed thee in the belly, I knew thee; and before thou camest forth out of the womb I sanctified thee, and I ORDAINED thee a prophet unto the nations.
Then said I, Ah, Lord GOD! behold, I cannot speak; for I am a child.
But the LORD said unto me, Say not, I am a child: FOR THOU SHALT GO TO ALL THAT I SEND THEE, and whatsoever I command thee THOU SHALT SPEAK."
If God knew him before he formed him (THAT is what the foreknowledge of God is) and ORDAINED him a prophet, there was NO WAY Jeremiah was going to do anything other than what God had ordained him to do.

The apostle Paul tells us in 1 Corinthians 9:16-17 - "For though I preach the gospel, I have nothing to glory of: FOR NECESSITY IS LAID UPON ME; YEA, WOE IS UNTO ME, IF I PREACH NOT THE GOSPEL!  For if I do this thing willingly, I have a reward: BUT IF AGAINST MY WILL, a dispensation of the gospel is committed unto me."

Paul's natural will and inclination certainly would not have been to suffer the persecutions, stripes, imprisonments, tumults and the loss of all things that he suffered for preaching the gospel. But God had called him to the ministry and it was "against his will" that he had to preach."

"But the Lord said unto him, Go thy way; FOR HE (Paul) IS A CHOSEN VESSEL UNTO ME, to bear my name before the Gentiles, and kings, and the children of Israel: For I will shew him how great things he must suffer for my name's sake."  Acts 9:15-16

Sennacherib, the pagan king of Assyria had come up against Jerusalem to take it captive, yet God says to him: "Because thy rage against me, and thy tumult, is come up into mine ears, therefore I WILL PUT MY HOOK IN THY NOSE, AND MY BRIDLE IN THY LIPS, AND I WILL TURN THEE BACK by the way which thou camest."

“O Lord, WHY HAST THOU MADE US TO ERR FROM THY WAYS, AND HARDENED OUR HEART FROM THY FEAR? Return for thy servants' sake, the tribes of thine inheritance.”  Isaiah 63:17

In order for God to convert the rebel enemy from following his own sinful desires and perishing for ever, He needs to do a complete heart transplant.

Man cannot possibly do this to himself. By nature, we don't even want to turn to God.

So we read: ”A new heart also will I give you, and a new spirit will I put within you: and I will take away the stony heart out of your flesh, and I will give you an heart of flesh.

And I will put my spirit within you, AND CAUSE YOU TO WALK IN MY STATUTES, and ye shall keep my judgments, and do them.”   Ezekiel 36:26-27

“Blessed is the man whom THOU CHOOSEST, AND CAUSETH TO APPROACH UNTO THEE, that he may dwell in thy courts: we shall be satisfied with the goodness of thy house, even of they holy temple.”  Pslams 65:4

“For IT IS GOD WHICH WORKETH IN YOU BOTH TO WILL AND TO DO of his good pleasure.”  Philippians 2:13

God DOES overrule our imagined “free will”, and we who are among God’s elect people can be very thankful that he does.

He saves us from ourselves, and gives us a new heart and a desire to come to him and He gives us both the repentance and the faith to believe in our Wonderful Lord and Saviour Jesus Christ who loved us and “gave himself for us to redeem us from all iniquity, and purify unto himself a peculiar people, zealous of good works.”

3 Blessed be the God and Father of our Lord Jesus Christ, who hath blessed us with all spiritual blessings in heavenly places in Christ:

4 According as HE HATH CHOSEN US IN HIM BEFORE THE FOUNDATION OF THE WORLD, that we should be holy and without blame before him in love:

5 HAVING PREDESTINATED US UNTO THE ADOPTION OF CHILDREN BY JESUS CHRIST TO HIMSELF, ACCORDING TO THE GOOD PLEASURE OF HIS WILL,

6 To the praise of the glory of his grace, wherein he hath made us accepted in the beloved.”

“That, according as it is written, He that glorieth, let him glory in the Lord.” 1 Corinthians 1:31

Consider the following verses that show how God works in the hearts even of unbelievers, to accomplish his will.

"But Sihon king of Heshbon WOULD NOT let us pass by him: FOR THE LORD HARDENED HIS SPIRIT, AND MADE HIS HEART OBSTINATE, that he might deliver him into thy hand, as appeareth this day."  Deuteronomy 2:30

"And the three hundred blew the trumpets, AND THE LORD SET EVERY MAN'S SWORD AGAINST HIS FELLOW, even throughout all the host" Judges 7:22

"And Absalom and all the men of Israel said, The counsel of Hushai the Archite is better than the counsel of Ahithophel. FOR THE LORD HAD APPOINTED TO DEFEAT THE GOOD COUNSEL OF AHITHOPHEL, TO THE INTENT THAT THE LORD MIGHT BRING EVIL UPON ABSALOM." 2 Samuel 17:14

"Wherefore the king hearkened not unto the people; FOR THE CAUSE WAS FROM THE LORD, THAT HE MIGHT PERFORM HIS SAYING, which the LORD spake by Ahijah"  1 Kings 12:15

"For of a truth against thy holy child Jesus, whom thou hast anointed, both Herod, and Pontius Pilate, with the Gentiles, and the people of Israel, were gathered together, FOR TO DO WHATSOEVER THY HAND AND THY COUNSEL DETERMINED BEFORE TO BE DONE."  Acts 4:27-28.

ALL of grace, believing the Book,