Free Will - the real cause of sin in the world

Free Will - the REAL cause of sin! 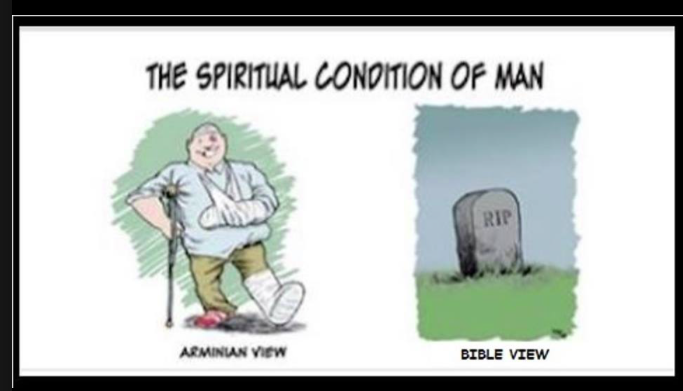 A Christian wrote me asking - "Did Adam and Eve have a free will?"

You bring up a good question about whether or not Adam and Eve had a free will.  I believe that the Godhead has a perfectly free will and it will never change. I also believe that Satan had a free will at one point, but no longer. We see Lucifer saying his 5 "I will"s in Isaiah 14 - "I will exalt my throne above the stars of God...I will be like the most High." etc.  It was Lucifer exercising his "free will" that is the origin of sin in the angelic world of the principalities and powers in the heavenly places.

And I believe that Adam and Eve had a free will. I think the big lesson God is teaching us is that anytime there are two independent wills in the universe, eventually they are going to come into conflict, and thus the origin and cause of sin.  I believe that it is actually man's most boasted and proud ability - his "free will" - that is in fact the reason for the fall of man and his ruin.

Let's look for a minute about what the Bible tells us about Adam and Eve.  In 1 Timothy 2:13-14 we read: "For Adam was first formed, then Eve. And Adam was not deceived, but the woman being deceived was in the transgression."

Eve was deceived. Genesis 3:6 tells us: "And when the woman saw that the tree was good for food, and that it was pleasant to the eyes, and a tree to be desired to make one wise, she took of the fruit thereof."  Eve may well have thought that it was A GOOD THING to eat of the tree. After all, isn't being made wise a good thing to do?  But she was deceived.

What about Adam?  He apparently was not deceived, but went into it with his eyes open.  He had a choice to make. He undoubtedly loved Eve. She was beautiful to look at and she gave him much pleasure. He no doubt liked being in her company and sharing with her their daily activities.

Some have even speculated that there is another parallel "type" between Adam and Christ.  As Christ loved the church and gave himself for it, so too Adam loved Eve and gave himself for her. But he had to make a choice. Was he going to go with what God said, or with his "help meet" whom he loved?

God is teaching us that only when there is just One Will - the Will of God - only then do all things work together for the good of all.That is why the perfect Son of man Jesus said - "Not my will, but thine be done." (Matthew 26:39) and "For I came down from heaven, not to do my own will, but the will of him that sent me." (John 6:38)

And this is why our Lord teaches us to pray in what is called The Lord's Prayer - "Our Father which art in heaven, Hallowed by thy name.  Thy kingdom come. THY WILL BE DONE IN EARTH, AS IT IS IN HEAVEN."  Matthew 6:9-10

He, as the 2nd man and the last Adam, did what the first Adam did not. He submitted his human will to that of God. (I also believe He is fully God as well; but that is a different issue)

So, Yes, I believe Adam and Eve both had a free will. But their free will eventually came into conflict with God's will and since the Fall of Adam and all mankind in him, all men and every individual born since then does NOT have a free will. We are born in bondage to sin and dead spiritually. A dead man in bondage has no free will.

Fallen man DOES have a "will", but it is governed by his fallen, sinful and self centered nature.  In carnal, physical things we can choose to wear the blue shirt or the red one, or pick a Ford over a Chevy, or eat pie or cake or both. But we cannot "will" to be born, or to have blue eyes or brown, or to be intelligent or not, or to grow wings and fly or not to die.  In the big things in life, we really have no choice in the matter.

And when it comes to anything spiritual and pertaining to the true God, as Jesus says: "Without Me, ye can do NOTHING." And "Ye have NOT chosen Me, but I have chosen you." John 15:5 and 16

We are clearly told in John 1:13 that the new birth is NOT of the will of man, but of God.

James 1:18 tells us: "OF HIS OWN WILL begat he us with the word of truth, that we should be a kind of firstfruits of his creatures."  Notice was God's will. Our "will" had nothing to do with it.

And in Romans 9:16 we are told of those on whom God wills to have mercy - "So then IT IS NOT OF HIM THAT WILLETH, nor of him that runneth, BUT OF GOD that sheweth mercy."

For more information on this, see my study on what it means to "receive" Christ as our Saviour. 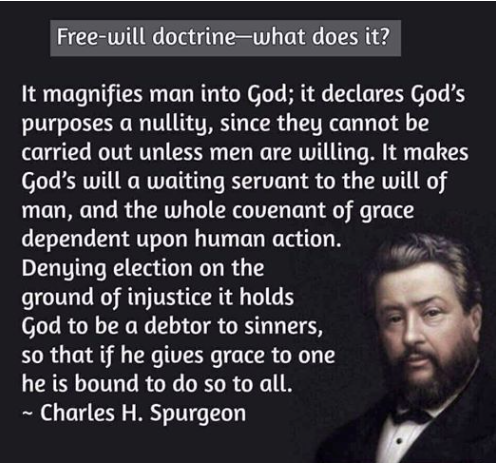 God does not force us to come to him. He makes us willing to come.

And - "For it is God which worketh in you BOTH TO WILL AND TO DO of his good pleasure."  Philippians 2:13

So the natural man's vaunted "free will" is a myth and is actually the cause of Adam's fall and our fall in him as our federal head and representative. 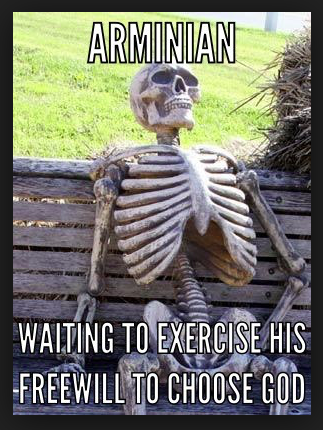 William Tyndale "Now faith cometh not of our free will; but is the gift of God, given us by grace, ere (before) there be any will in our hearts to do the law of God."
John 1:13: "Which were born, not of blood, nor of the will of the flesh, nor of the will of man, but of God."
John 3:27: "A man can receive nothing, except it be given him from heaven."
John 6:44: "No man can come to me except the Father, which hath sent me, draw him: and I will raise him up at the last day."
John 15:16: "Ye have not chosen me, but I have chosen you, and ordained you."
Romans 9:16: "So then it is not of him that willeth, nor of him that runneth, but of God that sheweth mercy."
Romans 10:20: "I was found of them that sought me not."
Philippians 2:13: "For it is God which worketh in you, both to will and to do of his good pleasure."
Augustine: "I once laboured hard for the free will of man, until the grace of God at length overcame me."
Waldensians: "Whosoever upholds free-will absolutely denies predestination and the grace of God."

Martin Luther - “Free will without God’s grace is not free at all, but is the permanent prisoner and bondslave of evil, since it cannot turn itself to good.”

A.W. Pink - "Those who speak of man's 'free will,' and insist upon his inherent power to either accept or reject the Saviour, do but voice their ignorance of the real condition of Adam's fallen children."

Charles Spurgeon - “We believe, that the work of regeneration, conversion, sanctification and faith, is not an act of man’s free will and power, but of the mighty, efficacious and irresistible grace of God.”

Augustine - "Free will without Grace has the power to do nothing but sin."

George Whitefiedl - "Man is nothing; he hath a free will to go to hell, but none to go to heaven, till God worketh in him" and "you dishonour God by denying election. You plainly make salvation depend, not on God's 'free grace' but on Man's 'free will.'"

Martin Luther: "Free will is an empty term."
"Free-will cannot will good and of necessity serves sin."
John Calvin: "The Papists hold that man, through his own free will, returns to God; and on this point is our greatest contest with them at this day."
"Concerning that this clown babbleth of free will, it is sufficiently rejected throughout the whole scripture."
"Faith is a special gift of God, which proceedeth not from our free will."
"Let that ethical philosophy therefore of free-will be far from a Christian mind."
William Tyndale: "they go and set up free-will with the heathen philosophers and say that a man's free will is the cause why God chooseth and not another, contrary to all scriptures."
John Owen: "the whole Pelagian poison of free-will is a clear exaltation of the old idol free-will into the throne of God That the decaying estate of Christianity have invented."
John Owen: Free will is "corrupted nature's deformed darling, the Pallas or beloved self-conception of darkened minds" (Works, vol. 10, p. 150).
John Trapp: "The friends of free will are the enemies of free grace."
Thomas Watson: "This crown of free will is fallen from our head" and "If it be God?s purpose that saves then it is not free will."
Matthew Henry: "The counsels and decrees of God do not truckle to the frail and fickle will of man.
Augustus Toplady (who wrote Rock of Ages): "A man's free will cannot cure him even of the toothache, or a sore finger; and yet he madly thinks it is in its power to cure his soul."
George Whitefield: "Man is nothing; he hath a free will to go to hell, but none to go to heaven, till God worketh in him" and "you dishonour God by denying election. You plainly make salvation depend, not on God's "free grace" but on Man's "free will."
J. N. Darby, early leader of the Plymouth Brethren: "This re-appearance of the doctrine of freewill serves to support that of the pretension of the natural man to be not irremediably fallen, for this is what such doctrine tends to. All who have never been deeply convicted of sin, all persons in whom this conviction is based on gross external sins, believe more or less in freewill" (Man's So-called Freewill, p. 1).
Charles Spurgeon:"I will go as far as Martin Luther, where he says, "If any man ascribes anything of salvation, even the very least thing, to the free will of man, he knows nothing of grace, and he has not learned Jesus Christ rightly."
"Free-will doctrine" - what does it? It magnifies man into God. It declares God's purposes a nullity, since they cannot be carried out unless men are willing. It makes God?s will a waiting servant to the will of man, and the whole covenant of grace dependent on human action. Denying election on the ground of injustice, it holds God to be a debtor to sinners."
"His will cannot be neutral or "free" to act contrary to his nature."
"Free will has carried many souls to hell, but yet never a soul to heaven."
"I do not come into this pulpit hoping that perhaps somebody will of his own free will return to Christ. My hope lies in another quarter. I hope that my Master will lay hold of some of them and say, "You are mine, and you shall be mine. I claim you for myself." My hope arises from the freeness of grace, and not from the freedom of the will."
Louis Berkhof: "Freedom of the will is a psychological fiction."
W. E. Best: "God's character is maligned by every person who believes in free will."
Steven Houck: "This free-willism is a serious error which is contrary to the Holy Scriptures."

Good explanation of the "free will" of man by R.C. Sproul.

All of grace, believing the Book - the King James Bible