More
Deuteronomy 32:5 were they God's children or not? 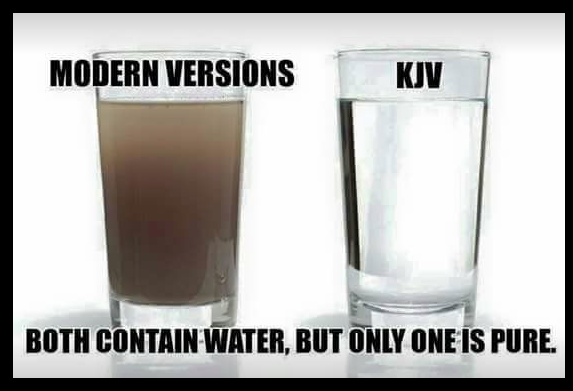 Tremendous error and contradiction have been introduced into this section of Scripture by the NKJV, NIV, RSV, Holman, ESV, NASB, MEV, Jehovah Witness NWT and Catholic “bibles”.

This is part of the song of Moses which says in verses 3-5: “I will publish the name of the LORD: ascribe ye greatness unto our God. He is the Rock, his work is perfect; for all his ways are judgment: a God of truth and without iniquity, just and right is he.”

The next verse is where the lies of the modern versions enter. The true Holy Bible says: “They have corrupted themselves, their spot is not the spot of his children: they are a perverse and crooked generation. Do ye thus requite the LORD, O foolish people and unwise? is not he thy father that hath bought thee? hath he not made thee, and established thee?”

If you look at the context, in the previous chapter God told Moses that the people would enter the promised land and would go a whoring after the gods of the strangers of the land and turn to other gods. God knew this before He brought them into the land, so their entering the land did not depend on their foreseen obedience to the law, but rather because of the covenant of grace made with Abraham.

They are still His children whom He bought (verse 6), His people and His inheritance (verse 9) and verse 19 still refers to them as “his sons and daughters”. They ARE His children even though disobedient, just as your child is still your child no matter what he does.

Many verses bring out this truth that God's redeemed people, His own children, are capable of corrupting themselves with the spot of idolatry. Here are just a few found right here in the book of Deuteronomy.

In Deuteronomy 4:15-20 God tells His people: "Take ye therefore good heed unto yourselves; for ye saw no manner of similitude on the day that the LORD spake unto you in Horeb out of the midst of the fire: Lest ye CORRUPT yourselves, and make you a graven image...But the LORD hath taken you...to be unto him a people of inheritance, as ye are this day."

In Deuteronomy 9:12 Moses rehearses how he had been 40 days and 40 nights in Mount Horeb where God gave him the tables of the covenant. While Moses was in the mount, God spoke to him and said: "Arise, get thee down quickly from hence; for thy people which thou hast brought forth out of Egypt HAVE CORRUPTED themselves; they are quickly turned aside out of the way which I commanded them; they have made them a molten image."

In Deuteronomy 31:29 Moses tells the children of Israel even before they enter the promised land: "For I know that after my death, ye will utterly CORRUPT yourselves, and turn aside from the way which I have commanded you...ye will do evil in the sight of the LORD, to provoke him to anger through the work of your hands."

John Gill comments on Deuteronomy 32:5: "their spot is not the spot of his children - Christ the rock has children given him by his Father, in whose adoption he has a concern, and by whose Spirit they are regenerated: these have their "spots"; by which are meant sins, and by those men are stained and polluted;... by nature they are as others, and while in an unregenerate estate, and indeed after conversion; though they are washed from their sins by the blood of Christ, and are justified by his righteousness, and so without spot, yet in themselves they are not without spots or sins, as their confessions and complaints, and all experience testify."

God’s children DID corrupt themselves with strange gods, and the spot or blemish they had was the idolatrous practices of other people, but they are still His children, bought by God and belonging to Him as the rest of Deuteronomy chapter 32 shows.

Other versions that agree with the King James Bible in Deuteronomy 32:5 in teaching they ARE still His children are Webster's 1833 translation, the Lesser Old Testament 1835 - "The corruption is not his, it is the defect of his children", The Jewish Family Bible 1864 - "The corruption is not his; it is that of his children.", Darby 1890, Youngs 1898, the Hebrew-English JPS translation of 1917, The New Jewish Version 1985 - "children unworthy of Him", the KJV 21st Century Version 1994, and  the Third Millennium Bible 1998.

Other English Bible that read like the KJB in Deuteronomy 32:5 and tell us that though they had spotted and stained themselves with the sin of idolatry, yet there were still His children, are the Boothroyd Bible 1853 - "corrupted are his own polluted children", The Word of Yah 1993, The Complete Jewish Bible 1998 - "He is not corrupt; the defect is in his children, a crooked and perverted generation.", Complete Apostle's Bible 2005, Bond Slave Version 2009, the Hebraic Transliteration Scripture 2010.

“Is corruption His? No; His children’s is the blemish; a generation crooked and perverse.”

Even Dan Wallace's NET version 2006 (though a paraphrase) got it right, saying: "His people have been unfaithful to him; they have not acted like his children – this is their sin. They are a perverse and deceitful generation."

The modern Complete Jewish Bible 1998 agrees that the children of Israel are still the children of God, saying: "He is not corrupt; the defect is in his children, a crooked and perverted generation."

The Complete Apostle’s Bible 2005 is pretty good, with: “They have sinned, not pleasing Him; spotted children, a crooked and perverse generation.”

The Spanish Sagradas Escrituras 1569, Cipriano de Valera 1602, and Reina Valera versions 1602, 1909, 1960, 1995 all clearly say that they are His children, even though they have the stain of sin. "La corrupción no es suya; de sus hijos es la mancha, generación torcida y perversa."

Translation- "Corruption is not His; of His children is the stain, a twisted and perverse generation."

The so called Greek Septuagint reads: “They have sinned, not (pleasing) him; spotted children, a froward and perverse generation.”

You can see it here - http://www.ecmarsh.com/lxx/Deuteronomy/index.htm

Translation - “They were corrupted. Their spot is indeed the spot of HIS CHILDREN. It is a crooked and perverse generation.”

The 1917 Jewish Publication Society reads differently but retains the correct meaning saying: "Just and Right is He. Is corruption His? No; His children's is the blemish."

The 1989 NRSV is different from all other versions, including the RSV and the ESV. It says: "just and upright is he; yet his degenerate children have dealt falsely with him...Is not he your father?"  At least the NRSV still teaches that they are His children, though degenerate ones at that.

The Hebraic Roots Bible 2012 has - He has not corrupted Himself; HIS SONS; IT IS THEIR BLEMISH; they are a crooked and perverse generation.”

Now look at the NKJV in Deut. 32:5. “They have corrupted themselves: THEY ARE NOT HIS CHILDREN, Because of their blemish.”

The NASB is similar with: “THEY ARE NOT HIS CHILDREN BECAUSE OF THEIR DEFECT."

The Holman Standard says: "this is their defect - THEY ARE NOT HIS CHILDREN."

Modern English Version 2014 - “They have acted corruptly to Him; they are NOT HIS CHILDREN, but blemished; they are a perverse and crooked generation.”

And the Jehovah Witness New World Translation joins these bogus bible versions and says: "THEY ARE NOT HIS CHILDREN, the defect is their own."

The Catholic Douay-Rheims of 1610 and Douay Version 1950 both say: "The have sinned against him, AND ARE NONE OF HIS CHILDREN in their filth: they are a wicked and perverse generation."

The NIV, RSV, and ESV are even worse with: “to their shame THEY ARE NO LONGER HIS CHILDREN”.

This teaches the doctrine that one can be a child of God and then lose it and no longer be His child, yet verses 6 and 19 still refer to them as His children.

The RSV, NIV, ESV and Holman Standard further confuse correct doctrine and hide the truth by mistranslating verse six where we read: "Is not he thy father that HATH BOUGHT thee?"

The correct reading that God had BOUGHT them is found in the Revised Version, the ASV, NKJV, NASB and MANY others. The Hebrew word means "to buy, to purchase, to redeem, and to possess." It does not mean "Creator".

However instead of saying: "Is not he thy father that hath BOUGHT thee?", the NIV, RSV, ESV, and Holman say: "Is he not your father, YOUR CREATOR, who made you?"

This rendering destroys the meaning of God buying or redeeming them, and merely teaches that He created them.

The Perfection of the King James Bible

Once again we can see the purification of God's words in the English language until we get to its "purified seven times" perfection in the King James Bible.

The Geneva Bible also had it wrong by telling us that the children of Israel were NOT His children, and this again contradicts with the very next verse, even in the Geneva Bible. The Geneva Bible reads: "They haue corrupted them selues towarde him by their vice, NOT BEING HIS CHILDREN, but a frowarde and crooked generation."

Wycliffe 1395 had (modern spelling): "They sinned against him, and THEY BE NOT HIS SONS, they be in the filth of idolatry".

Coverdale 1535 also had: "have marred themselves to homeward AND ARE NOT HIS CHILDREN"

Both Tyndale and Matthew's bible 1549 said: "and are NOT his sons for their deformities sake".

The King James Bible was the first one to get it right.

"Ye have perverted the words of the living God" Jeremiah 23:36

ALL of grace, believing the Book - the King James Holy Bible.