Catholics and the King James Bible

Catholics and the King James Bible 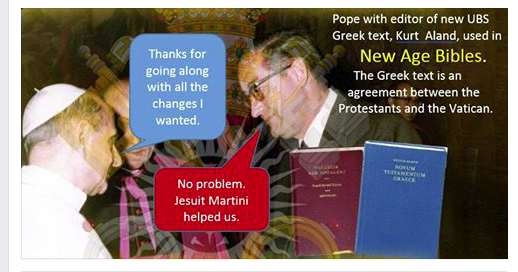 There is a recent article posted at Catholic New Agency that reports on the Vatican Exhibition that [allegedly] Highlights the Catholic Roots of the King James Bible.  If ever there were a piece of Revisionist Propaganda, this is it.

The article states: “Vatican City, Feb 28, 2012 / CNA News.- A new interfaith exhibition that opens this week at the Vatican reveals how the roots of the 1611 King James Bible are almost entirely Catholic – despite the fact that the translation was often viewed as a highpoint of Protestant European culture.

“If it had not been for the Catholics of the 1500s there would be no King James Bible,” exhibition organizer Cary Summers told CNA.

The whole article is Revisionist History, a total distortion of the facts and pure Jesuit sophistry at its best - in other words, a pack of outright Lies.

The Catholic church was always against having the word of God in the language of the people, until they were forced to do so because of the Reformation.  They then began the counter-Reformation and produced their own ever changing bible versions.

The KJB translators openly called the Pope the Antichrist and they spoke out against the Catholic versions and how inferior they were.

See  “the very meanest translation is still the word of God” for documented proof of what the King James Bible translators thought of the Catholic versions.

The Catholic Douay Rheims came out in 1582 with the N.T. and in 1610 with the complete bible. It was NOT based on Erasmus’ Textus Receptus, but on the Latin Vulgate, which actually was much closer to the truth than are today’s new Vatican Versions like the ESV, NIV, NASB AND the modern Catholic bible versions like the St. Joseph NAB and the New Jerusalem bible.

When this Vatican spokesman says the “Catholics” help give us the KJB, they are referring to EX Catholics like Tyndale, Coverdale and Wycliffe.

The Catholics condemned Wycliffe even after he was dead and dug up his bones and burned them because he had translated the Bible into English.  That’s how much the Catholic church appreciated his efforts. When English Bibles began to be printed, the Catholics hunted down anybody that had a bible and burned them at the stake along with their Bibles.  See ‘A Lamp in the Dark - the Untold History of the Bible’ video that is now on You tube

As for Tyndale, he once was a Catholic but he got converted and became a Reformer. The Catholic church chased him all over Europe and finally caught him and burned him at the stake. Miles Coverdale was also once a Catholic but then got converted and became a Reformed Puritan. The Catholic church never did approve of the Textus Receptus. In fact, the Council of Trent (1545-1564) branded Erasmus a heretic and prohibited his works. In 1559, Pope Paul IV placed Erasmus on the first class of forbidden authors, which was composed of authors whose works were completely condemned.

The article goes on to say: “The King James Bible has bequeathed a body of language that permeates every aspect of our culture and heritage, from everyday phrases to our greatest works of literature, music and art. “

A recent study suggested that there are over 250 phrases and idioms in common English usage that have their origins in the language of the King James Bible. These include “how the mighty are fallen,” “the skin of my teeth,” “nothing new under the sun,” and “the salt of the earth.” The Vatican exhibition hopes to show that all Christians can share the King James Bible in common.”

Well, you can look of these common phrases and 3 out of the 4 do not read this way in the Catholic Douay-Rheims and the only one that does - “the salt of the earth” as found in Matthew 5:13 -  was written that way from the time of Wycliffe 1395, Tyndale 1525, Coverdale 1535, the Great Bible 1540, Matthew’s Bible 1549, the Bishops’ Bible 1568 and the Geneva Bible long before the Catholic Douay ever translated it into English.

Of the other three, the phrase “how the mighty have fallen” is found in 2 Samuel 1:25 but the Catholic Douay-Rheims says: “how are THE VALIANT fallen ”.

One other Bible critic I ran into was trying to tell us that the KJB got a lot of its phrases from the Douay-Rheims bible, as if this somehow made the KJB a Catholic Bible.

He posted these two examples.

Bible critic says: "This also explains the incorporation into the King James Bible from the Rheims New Testament of a number of striking English phrases, such as "publish and blaze abroad" at Mark 1:45”

KJB does not read ”publish and blaze abroad” but this:-

“But he went out, and began TO PUBLISH IT MUCH, AND TO BLAZE ABROAD THE MATTER, insomuch that Jesus could no more openly enter into the city, but was without in desert places: and they came to him from every quarter.

The Douay-Rheims is similar but not exactly the same.  It has this (with the differences being in capital letters)

“But he BEING GONE out, began to publish and to blaze abroad the WORD: SO THAT HE could NOT openly GO into the city. but was without in desert places. And they FLOCKED to him from ALL SIDES.”


Then this particular Bible Critic says: “Allen shows that in several places, notably in the reading "manner of time" at Revelation 13:8, the reviewers incorporated a reading from the Rheims text specifically in accordance with this principle.”


8 And all that dwell upon the earth shall worship him, whose names are not written in the book of life of the Lamb slain from the foundation of the world.

"Searching what, or what MANNER OF TIME the Spirit of Christ WHICH WAS in them did signify, when it TESTIFIED BEFOREHAND the sufferings OF Christ, and the GLORY  that should follow."

The Douay-Rheims also reads “what manner of time” here, but Wycliffe 1395, which was almost 200 years earlier, has “what maner tyme “.

The Douay-Rheims reads: “Searching what or what MANNER OF TIME the Spirit of Christ in them did signify, when it foretold those sufferings that are in Christ and the glories that should follow.”

There are many word differences in this one verse between the KJB and the Douay-Rheims.

I am sure the KJB translators were familiar with the Douay-Rheims translation because they mention it in their Preface to the reader and they criticize it.  (See end of this article)

But there was still a lot of truth in the Douay-Rheims bible, and it had most of the verses in it that the modern versions omit, both Catholic and ones like the ESV, NIV, NASB, NET, etc.

So what if they may have borrowed a phrase or two from the Douay-Rheims?  This doesn’t make it a Catholic bible.

I think the Bible agnostics and unbelievers in the inerrancy of ANY Bible in ANY language they can show us are scraping  the bottom of the barrel looking for ANY excuse to try to discredit the King James Bible in some way.

Here is a Catholic website called Catholic Bibles where you can see the ESV advertised. -

But you won’t find the King James Bible on this list.

Throughout the Preface there are repeated references to the contrast between between the Bible translation work of Christians of the Reformation faith and those of the Catholic church.

The whole quote in context is this. “Now to the latter we answer, That we do not deny, nay, we affirm and avow, that THE VERY MEANEST TRANSLATION of the Bible in English SET FORTH BY MEN OF OUR PROFESSION, (for we have seen NONE OF THEIRS of the whole Bible as yet) containeth the word of God, nay is the word of God.”

It should be clear that Miles Smith (the man who wrote the Preface) is referring to the Douay-Rheims ENGLISH NEW TESTAMENT here, which was published by the Roman Catholics in 1582, the Old Testament not appearing until 1610, some five or six years AFTER the King James Bible translators began their own work of translation. Thus the reason for Smith's notation that they had "SEEN NONE OF THEIRS OF THE WHOLE BIBLE AS YET."

Even the Catholics themselves acknowledge that the King James Bible translators severely criticized and mocked the Catholic versions.  Here is their own Catholic Cultur.org site where they talk about their Douay-Rheims bible.

Here in their own words they mention: "Further, the translators of the KJV make specific reference to the Douay version in their translators' preface, where they devote space to attacking the word choices made by the translators of the Douay. "We have shunned the obscurity of the Papists, in their [use of words like] AZIMES, TUNIKE, RATIONAL, HOLOCAUSTS, PRAEPUCE, PASCHE, and a number of such like [words], whereof their late Translation is full" ("The Translators to the Reader," King James Version, 1611 ed.).

“Men of our profession” refers to the Protestant, Reformation Christians and the “theirs” refers to the Catholics. In the previous paragraph to this quote we read them say regarding “the translations of the Bible maturely considered of and examined” that “all is sound for substance in one or other of OUR editions, AND THE WORST OF OURS FAR BETTER THAN THEIR AUTHENTICK VULGAR” (which refers to the various Latin Vulgate versions)

The context of the Preface by Miles Smith shows the contrast between early English Protestant translations and the "Bible" of the  Roman Catholic Church. Translations like Tyndale's 1525, Coverdale's 1535, the Great Bible 1540,  Matthew's Bible 1549, the Bishops' Bible 1568 and the Geneva Bible 1587 and such were translations "set forth by men of our profession" and thus, "containeth the Word of God, nay is the Word of God."

Throughout the Preface there is a constant contrast between "our" and "their" translations, and between Protestant thought and Catholic thought. They also state in their Preface - "also on the other side we have shunned the obscurity of the Papists, in their asimes, tunike, rational, holocausts, praepuce, pasche, and a number of such like, whereof THEIR LATE TRANSLATION, and that of purpose to darken the sense, that since they must needs translate the Bible, yet by the language thereof, it may be kept from being understood.”

In another part they stated: "So that if, on the one side, we shall be traduced by Popish Persons at home or abroad, who therefore will malign us, because we are poor instruments to make God’s holy Truth to be yet more and more known unto the people, whom they desire still to keep in ignorance and darkness”.

The professing Evangelical churches are definitely returning to Rome by their new Vatican bible versions, the "Christian" book sellers and in the public bowing before the Pope by representatives of almost every Protestant and Evangelical denomination. See the proof of all this in this 6 and 1/2 minute video.

"Come out of her, my people, that ye be not partakers of her sins, and that ye receive not of her plagues." Revelation 18:4See More
The Real Bible Version Issue EXPOSED 7
www.youtube.com
Part 7 of the video. The Jesuit "Counter Reformation" is nearly complete!

There are two very good videos that deal with the history of the Bible and the Roman Catholic influence to try to destroy the doctrine of Sola Scripture or the authority of the Scriptures Only.  They are both produced by Chris Pinto.  They are quite long, but they are very well done and you can watch them in sections, like I did.  The first is called A Lamp in the Dark. Here is the link -


And the second is called Tares Among the Wheat, which documents how the Catholic church has sought by numerous means to discredit the infallibility of the Bible. Here is that link -