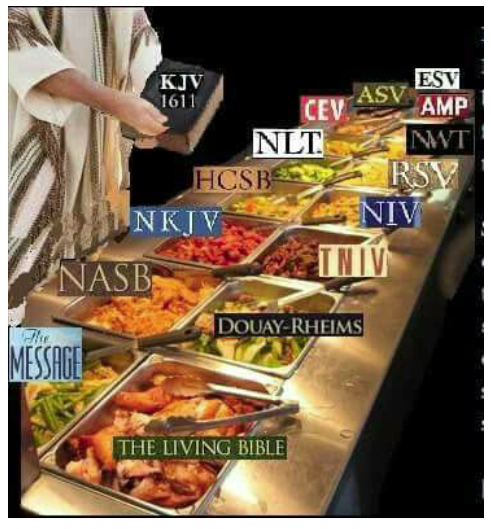 Bible Agnostic Mantra - "We need to go to the Hebrew to see what it REALLY says."

God's word - "In those days there was no king in Israel; every man did that which was right in his own eyes."  Judges 21:25

Exodus 26:14 KJB - "Thou shalt make a covering for the tent of ram's skins dyed RED, and a covering of BADGER'S skins".

ISV (International Standard Version) - "You shall make a cover for the tabernacle of ram skins dyed red and a covering of DOLPHIN SKINS above that."

ASV - " And thou shalt make a covering for the tent of rams' skins dyed red, and a covering of SEALSKINS above."

NASB 1972 to 1995 editions - "You shall make a covering for the tent of rams' skins dyed RED and a covering of PORPOISE SKINS above."

But wait?  Now the NASB 2020 edition has come out, and guess what. Yep, they changed it again.  Now it reads: "And you shall make a covering for the tent of rams? skins dyed RED and a covering of FINE LEATHER above."

Holman Standard - "Make a covering for the tent from rams skins dyed RED, and a covering of MANATEE SKINS on top of that."

The Jewish Family Bible 1864 - "a covering of TACHASH skins"

The Ancient Roots Bible 2010 - "a covering above THE MOHAIR SKINS"

So called Greek Septuagint - "and BLUE SKINS as coverings above."

Many commentators are all over the board on what the Hebrew word means here. Some say it's probably such and such an animal and others some kind of a color, but most end up just admitting that they do not know for sure.

I had one Bible critic write me saying: "The only reason the KJV et al translate "tachus" as "badger" is by false etymology to the Latin transliteration "taxus" which means "badger." Badger skins would have been a horrible choice to use to cover the tabernacle, as they are so small. Dozens of badgers would have had to have been chased down, caught, skinned, thrown out as unfit to eat, and then laboriously sewn together into a watertight covering.The Tachus was an animal so big that only a few of its hides were required to cover the entire tabernacle. And it was clean. It just wasn't native to Israel."

The big problems with this guys criticism are two. First, the Latin Vulgate does NOT say Tachus or anything even remotely close to this.  The Latin Vulgate reads: "et pelles arietum rubricatas pelles ianthinas et ligna setthim" which translates as "And rams' skins dyed red, and the wood of shittim wood, the curtains of VIOLET COLORED SKINS."

"Violet colored skins." That is why the Catholic Douay Rheims and the Douay both read this way - because they translated from the Latin. Secondly, if you do a Google search or look in any Dictionary, you will not find any such animal called The Tachus. No such animal exists.  And yet this Bible critic tells us all kinds of fascinating details about the nature of this imaginary animal.

Some Bible critics even go so far as to say that the badger did not exist in Israel, Palestine or the desert area, yet all one has to do is do an internet search of "badger", oftenly referred to as "the pound for pound toughest animal on the face of the earth", and you will see that badgers DO exist in Israel and Palestine even today and have existed throughout history in almost every area on the face of the earth.

You can also go to this site and see what the Badger's pelt actually looks like and what a perfect covering for the Tabernacle in the wilderness it would have made.

Bible versions as well are totally confused and contradictory when it comes to translating this word, yet all the "scholars" have "gone to the Hebrew" like they tell us we need to do in order to see what this word means.

The Hebrew Transliteration Scriptures 2010 - "a covering of BADGER'S skins."

Beauty was inside the Tabernacle. The outside withstood the rain, storms, and the sun. Jesus withstood the torture, ridicule, and shame of the Cross for our sake. He weathered the storm that we might enjoy the beauty inside.

Non-Christians never see the inner beauty of Christ. They only see the plain boring looking badgers' skins. We who are in Christ are able to enjoy the beauty of the gold!"  Distributed by Hope of Israel Baptist Mission  -   Copyright 1997-2006.

The Wild and Wacky NIVs

While the Spanish NIV says it was "DOLPHIN SKINS" (pieles de delfín) and the NIV Portuguese version says it was "leather". - "Uma cobertura DE COURO."

Let's see... "sea cows", Nope, how about "other durable leather", or maybe it was "dolphin skins", Nah...let's go with just plain old "leather" instead. That's your dependable NIV scholars for ya.

The 1989 Revised English Bible says: "DUGONG SKINS"; a dugong looks sort of like a walrus. The ASV says "SEAL SKINS". The RSV and the 2001 ESV both have "GOATSKINS".

Lamsa's 1936 translation of the Syriac says "skins dyed with vermillion"; the 1917 JPS says "sealskins", Green's 'literal' has "DUGONG skins", and Dan Wallace's NET version and the NRSV say "FINE LEATHER", and the Holman Standard says "MANATEE SKINS" and the 2011 Common English Bible tells us it was "BEADED LEATHER" (whatever that might be).

Among the Catholic versions the 1610 Douay-Rheims and the 1950 Douay tell us it was "VIOLET COLORED SKINS". But then the 1968 Jerusalem bible says it was "FINE LEATHER", while the 1970 St. Joseph NAB has "TAHASH SKINS" and finally the 2009 Catholic Public Domain Version has settled on "SKINS OF VIOLET" once again.

Some versions like the Judaica Press Tanach and the Orthodox Jewish bible of 2011 have no idea what this animal was, so they just transliterate the word that for them has no specific meaning - "and tachash skins". There is NO such animal known as a "tachash".

Eugene Petersons' The Message tells us it was "dolphin skins".

Scholarship is a wonder to behold, isn't it?  You always have to wonder what they will come up with next. Hey,  "badger skins, porpoise skins, sea cows, goatskins, violet colored skins, sealskins, dugong skins, manatee skins, dolphin skins, and durable leather" - they're all about the same, right?

While wandering around in the wilderness for 40 years, badger's skins might be troublesome to get, but how many "porpoises" (NASB) or "sea cows" (NIV) or "manatees" (Holman) do you think they could have scrounged up? Possibly porpoises or sea cows would have been found in the Red Sea, but the wandering Israelites were not near the Red Sea during their wilderness wanderings, but in the desert. Hellooooo... Is anybody home?

This from  http://marilynndawson.hubpages.com/hub/Badger-Skin-Ancient-Jewish-Bridal-Attire about Badger's skin - You can also see a picture of what Badger pelts look like.

"The first point of interest, is that we are unable to consider this footwear without considering it's use first mentioned in Scripture, that of the outer covering of the Tabernacle. While the colour is indeed stated as unassuming and drab, the nature of the skin is what God was after. Badger skin has been well-known down through the ages as being excellent protection against the natural elements of storm, dust, and weather. While this author has never held a badger skin in her hands, it is said that the way the hair grows on the animal, water, ice and snow roll off it like water off a ducks back. So while the more colourful and rich fabrics were underneath, the badger skin protected the Tabernacle from all inclement weather the Hebrews would encounter on their travels. In addition, it was to cover the tables, altar, lamp stands, and Ark of the Covenant in transit. This gave a very unassuming appearance to a very important part of Tabernacle set up, protection and transportation."

The King James Bible is always right. Accept not substitutes.